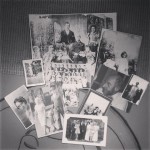 On my mother’s side, I come from a long line of little, curvy, smily kind of women. On my father’s side you find the stronger, more serious, taller and darker women. At least, that’s how I remember them. My mother’s mother grew to the dizzy heights of 4’11”, and her husband escaped a life in the mines because he was thought to be too small and weak. He became an excellent draughtsman instead.

When I was young, my brother and I would try and infect each other with childhood diseases because of the adventure that a week off school would bring. (Yay! German Measles! Woo-hoo! Mumps! You can keep the Whooping Cough, that sounds nasty…) When I passed him the chicken pox, I clearly remember feeling jealous because he scored a week with my mother’s parents in the Peak District. My grandparents on both sides all passed on when I was quite young, so my memories are filled with that particular kind of sweet nostalgia for sunny afternoons spent trying to catch bees in grandad’s snapdragons and chewing raw rhubarb dipped in sugar where Mum wouldn’t catch us. All I can smell is gorse flowers on the moors and my grandmother’s cakes baking. I can still taste the illicit thrill of Special K drowned in sweet tea for breakfast. “But Grandma and Grandad have it everyday!” “Grandad and Grandma have no teeth, that’s why!” 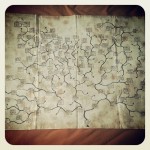 As a pagan, it feels right to me to honour my ancestors for the wisdom, hearts and hands they passed down to me. But there’s an easier glamour in the distant, noble men and women who greeted the Romans with wary eyes – those strong, tattooed, obviously true and uncorrupted, uncivilised pagan types. The fact is, I can be fairly sure that my ancestors are overwhelmingly British – with a strong Saxon streak on my father’s side. So very British in fact, sometimes I wonder if this was a choice, or if they simply never met any foreigners after 1100BCE. But what remains of their lives other than that broad genetic identifier are just fragments of stories. There is one long dead woman who lost all her children and husband to a single plague and buried each one on the small holding she continued to farm into her eighties. One little boy was born so far out of wedlock that even the question of which teenage girl birthed him is now forever a mystery. My mother turns up ever more tragic court accounts of destitute Osbistons being sent back to their ‘home’ parish to be a burden on someone else. My father has traced a whole line of William, son of John, son of William, son of John Pearces; stout yeoman farmers running back into the 11th century. 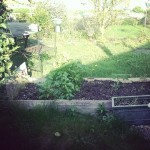 Among the last dozen and more generations, I can be sure that almost all of them were god-fearing, Christian, small town folk, who would be bewildered and sceptical of the wide horizons of my faith today. And there are dark currents swimming in the family blood too – a streak of violence, of children and women abused, and men who abandon pregnant women. This happens so often it’s a wonder my mother chose a man who stayed with her until I was eight. The story of my own childhood can be told as a long, complex and often extremely dark journey between islands of safety. But it makes a difference that although my birth family were often wilfully blind to what was done to me, the source of my own traumas lies outside of either ancestral line.

But still, the moral compass of those recent ancestors was set differently to mine. My great-grandmother on my father’s side never spoke to my aunt and uncle again after their divorce. Luckily she died before my mother and father also broke up, or she’d have had only one grandchild left to visit her. My great-grandmother on my mother’s side would have been shocked to learn that we use our harmonium not to play carols and hymns, but the exotic and heathen Hanuman Chalisa. Their lives were lived to a liturgical rhythm and an ethical code I have rejected. And yet there is a bond there stronger than such differences. What we have in common still is the small, fundamental things. Kindness, justice, family, good food and good hugs. Caring for the ground that feeds us and an appreciation of simple pleasures. I’d be shyly embarrassed to show my granddad the state of our half-neglected veg plot, left unplanted so late in the year, but I’d be eager to see what he made of my foraged wild garlic pesto. 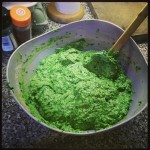 Yesterday, I baked 12 little Simnel cake muffins. I made them properly, rich and sweet, with none of my usual hippy, healthfood substitutions. Okay, two minor substitiutions to how my mother makes her Simnel cake: the flour was spelt, and all the sugar was unrefined, but I even made my own marzipan. Just as I remember my mum telling me, there are 11 marzipan balls on top to represent the apostles (Judas gets traditionally snubbed), and instead of the large ball in the centre of the cake, one muffin has a little marzipan star for the resurrected star-child himself. It’s very nearly Easter after all: a Christian festival carrying the name of a Saxon Spring goddess. I know my mother’s mother would have approved of everything about them, and surely wouldn’t have given a damn about how many calories they had.

And so today I bless, honour and name, with all my heart, all the in-between ancestors; that long chain of people who came after the land was settled, civilised and divided – the ones who worked all their lives in mines and factories; who baked everyday and grew their own food, and helped raise and shape us into who we are today. For Douglas and Hannah, for Valerie and Derek. May you be as proud of me as I am still of you. 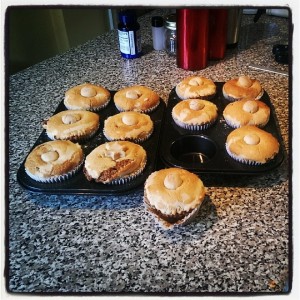