We’re away on Thursday, so this week’s blog is a little early.

Because the sun is high and Spring is definitely here, I decided to share something bright, colourful and goddess-inspired. Uma Dinsmore-Tuli’s book, ‘Yoni Shakti’ (available in all good bookshops – buy it now!) includes as an appendix, beautiful yantras of all the ten Hindu wisdom goddesses whose study forms a great part of the text. Yantras are part of the Tantric practice of sacred art. Just as a mantra is a sacred sound used to invoke divine aspects or channel energy, so a yantra is the same in visual form. It is both a visual representation of deity, and also a ‘murti‘ – a manifest echo of the deity itself. It is a meditative, devotional act to both create one, and to gaze upon one. I love their geometric elegance; their simple symbolism, and the brightness of colours designed to catch the eye and form after-images on the retina.

The yantras in ‘Yoni Shakti’ were painted by Nirlipta Dinsmore-Tuli. I’ve seen them for real as three foot square canvases, and they are stunning. It wasn’t until I had a copy of the book that I started with my own minor obsession with them. Unlike Nirlipta, much of my physical artwork is characterised by its small, sometimes almost miniature scale. I love things that are tiny and self-contained; things of beauty that you hold close and intimate to catch every detail. I’m extremely myopic, which is either part of the reason, or part of the result of this love of tiny things. In my shamanic studies too, I found a fast and lasting affinity with the small, the local, the spirits of place that take the form of a clover leaf or a woodlouse.

Students are familiar with my palm-sized portable altar box of tiny inspirations: filled with such sacred, mundane things as fragments of pottery and seashells. I decided what I really needed to add to it next is my own yantras: the ten wisdom goddesses and the much more difficult Shri Yantra. This last one I added partly because it is a maha or great yantra that combines many others and epitomises joyous abundance to me, but also to see if I could draft it properly at a small size. In one photo, I have included the cat, just for scale! 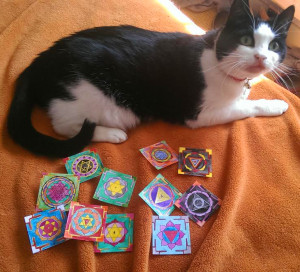 Each of these yantras is traditional in form, but closer to three inches rather than three feet across: drafted in pencil, painted in watercolour and lacquered. I’m really very pleased with how they turned out. The Shri Yantra took me a few goes – here’s a link if you’d like to have a go at drawing your own. There are nine drawn triangles in a Shri Yantra, each with its place and proportions determined by the others, and forming between them forty-four incidental triangles in total, almost evenly balanced between the ‘feminine’ or ‘shakti’ triangles pointing down, and the ‘masculine’ or ‘shiva’ triangles pointing up. One more shakti than shiva triangle is drawn. The shifting balance they represent isn’t really male and female, but closer to the yang and yin – in this Tantric cosmology, the feminine, shakti triangles denote power and action, whilst the masculine, shiva triangles denote knowledge and reflection. The two deities are so closely linked both in philosophical essence and ancient legend, they are often combined as Shiv-Shakti, and shown as consorts or lovers. Shiva consciousness is also represented in the ‘bindhu’: the seed or gaze point at the centre of the designs. Just like Nirlipta, my bindhus are not just dots, but tiny lingham ovals. Petals around the centre denote beauty and abundance, and each yantra is framed by four gates, so the energy can flow in all directions.

In the wisdom goddess collection there are more well known deities, such as the ferocious Kali, Tara the guiding star, and Bhuvaneshwari, mother of the world; but also less well-known aspects and avatars, such as Matangi, Dhumavati and Bagalamukhi. Uma has her own interpretation of how they map to a particularly female-friendly map of life experiences, but as valuable as it is, it is only a map: the thing about yantras is that they are a way in to forming one’s own relationship and associations. It’s good to notice if one calls to you and work with each in turn. Being able to fit all of them into the palm of my hand makes that so much easier, and makes me very happy indeed. 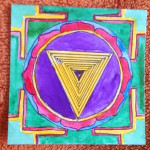 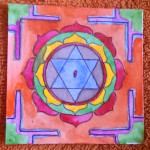 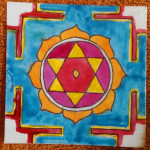 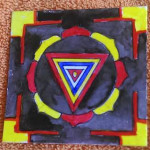 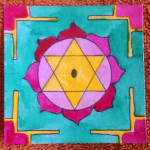 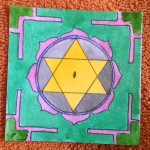 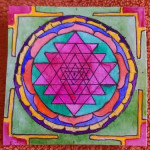 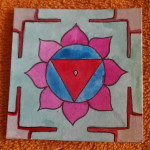 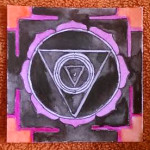 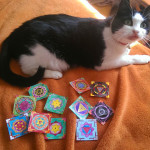 ← Simnel Cakes
Peace at what price? →