Pictures for a purpose

I will happily admit that I am a complete amateur in all my art and design skills. As I head towards my third degree (!) in the Autumn, I still cherish those skills that I did not learn in any kind of school. Many, many years ago, a therapist asked me to draw for her, because anything I wrote felt too polished, too mediated by years of training. When I brought her the first sketch I ever made as an adult, she paused and said

The second drawing I made, I went right out on an impulse and had tattooed onto my arm, and then kept drawing. Years later, I even apprenticed as a tattoo artist myself for a while. There are a modest number of souls in the world with my designs inked into their skins, which is a strange thought. Then, when I was lost and rather homeless and jobless, some dear friend, wherever he may be now, sat me in front of his computer and a copy of Photoshop and spent two hours showing me how it all worked. it is all the design training I ever got. But for the next few years, most of my very modest income was earned in the heady heart of the underground and often illegal rave community, making it a little bit prettier, especially online.

I am not a great designer, but I am competent enough at the level I choose to do it. I decided in the end that I didn’t want to become a commercial designer or illustrator. There are easier and more rewarding ways of making a living, and I need a vocation that has more heart to it, as a rule. But there are a few things I’m really proud of, and others I love for what they represent. Here are some of them. 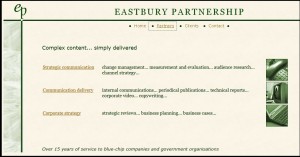 This was perhaps the scariest brief ever. My father has had a website since before I even knew the internet existed. He’s a business consultant, to this day quietly working with some very big names. One day he asked Phil and I to help redesign his website. Following our usual pattern, Phil made it work and I made it pretty. It’s very functional, quite, quite discrete, and he hasn’t had anyone redesign it since, which is nice. 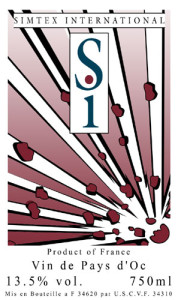 Just upstairs from Dad was another small consultancy specialising in the safe transport of explosive materials. They seem to have grown a lot since, but back then mostly it was a trio of ex-military chaps helping people import really big fireworks. They wanted to give their clients an unusual Christmas gift – a bottle of wine with their own label on it. I based it on the most common danger sign for explosives, and had a lot of fun with it. I’ve still got the bottle somewhere. 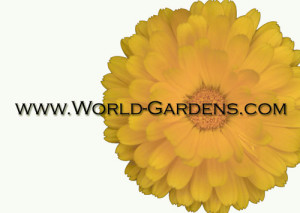 And then there was the garden photographer that we spent a few years on and off designing for. This web and print project was a joy for me, because the source material was so good. I had thousands of beautiful photographs to choose from. This is the one we chose for his promotional postcard. 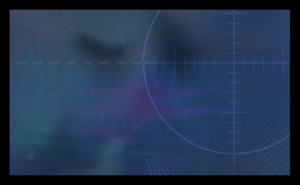 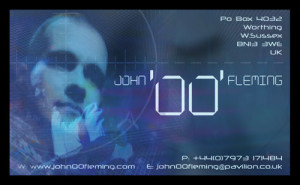 Possibly the biggest name that we worked with in the dance community was the DJ John ’00’ Fleming. Among other things, I got to design him a double sided but transparent business card. He’s still out there, but he’s had much more hip designers in since I was around.

Mostly, I did designs for tiny indpendents, such as a range of CDs for the Magic night in Reading. Forgive the Papyrus font. It wasn’t quite as over-used then. 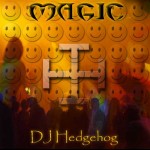 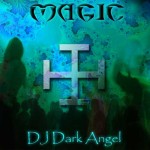 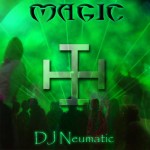 A flatmate of ours once brought home all his childhood Lego, and there was nothing for it but to have a Lego party. It was so much fun we did it twice more. That’s just three weekends of Lego over a few years – we weren’t obsessed or anything – but we did have a theme. We made a club, then a bigger club, then an outdoor festival, all in Lego. Once completed, the project took on a life of its own, and ended up featured in Mixmag, which was fun. Then we put the Lego away.

Ever since, the photos turn up occasionally in the oddest places, all over the internet, and once spotted on the cover of a French dance record. We don’t mind, but it’s nice when people recognise it as our work and link back to the source. There’s a website and everything, with lots of photos, flyers, reviews and more. And yes, the turntables really go round, and that is a cycle powered outdoor cinema. 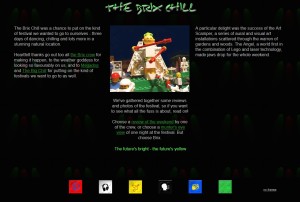 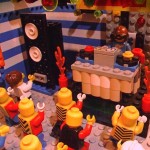 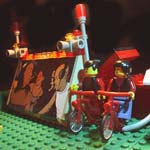 Nowadays I still help people who want a flyer here and there. And of course, I design everything for this site and my own flyers, business cards and posters too. Here’s two from this year, from two events I am co-running (DruidCamp) and helping out at (SuperSpirit). It’s still a fun thing to do, and always a buzz when you get to hold the real thing in your hands and think: I made that! 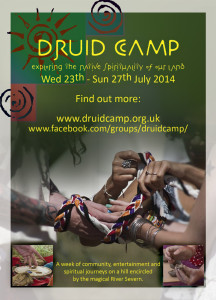 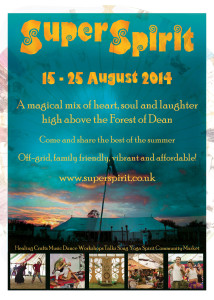 The most alternative organisation Phil and I were…are…ever involved in was…is the Babylon Project. It’s complicated. I still have no idea really what we were…are…doing, nor really who else was in it. To give you a flavour of why, those of us who knew we were in it once received word that an anonymous person had booked a workshop space at the London Anarchists’ Bookfair that year, in the name of the Babylon Project. We all promtly turned up to see who it was, although we were rather in character, with me as a wide-eyed hippy idealist and Phil with an earpiece and sunglasses taking notes at the back, among others. I’m not sure what the others were doing. Anyway, we turned up, and some people turned up to attend the workshop, and…no-one turned up to lead the workshop. So we led the workshop. No-one ever admitted to booking the session. It’s the kind of thing that happens when your website has warnings like:

“THIS PROJECT IS DESIGNED TO FUCK WITH REALITY. BOUNDARIES BETWEEN ITS NARRATIVE AND EVENTS IN BASELINE REALITY ARE DESIGNED TO MELT. “

Anyway, as far as we know, we’re still implicated in this supreme anarchic opera of silliness, and here’s a website that I helped design. Mostly I’m proud of the front page, which is much more Phil’s work, as I only contributed the source images. This is because that’s a real constellation (Sirius), and apart from the shooting star .gif, that pattern is made by repeating the same image over and again, with placement and spacing determined by the hard code of HTML alone. This is a crazily hard thing to attempt, and for no really good reason. It’s the old school web design equivalent of climbing a mountain ‘because it’s there’. 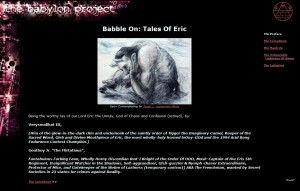 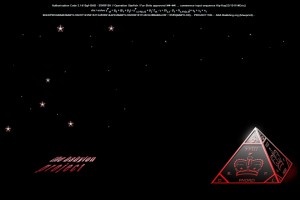 And to the most personal design work of all. I have married my husband at different times and different ways on five occasions across almost fifteen years. Firstly on a beach on Barbados in 1999 after ten short weeks together, then a series of three handfastings a year and a day apart each time, and then for our tenth anniversary. We’ll probably do it all over again at some point. Because we practically eloped for our first time, we made a website of the photos to show everyone who probably should have been there. That’s lost in the ether now, but here’s our main handfasting site: 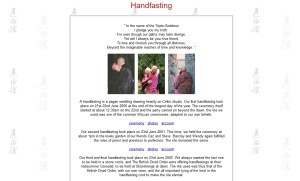 And the last time I had a website, which is years out of date and very much a product of who I was then, which is not who I am now, not even by name, but it looked like this: 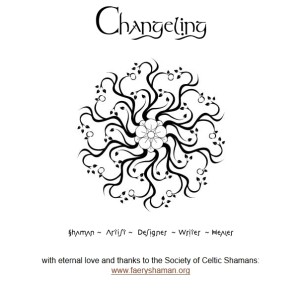 And it had a hard-coded, complex, maze-like structure of links, that however you travelled it, led you here, to the centre: 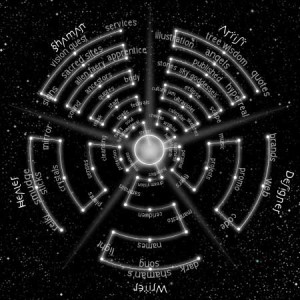 In the beginning was the line, and the circle.
Time and existence met, and became the spiral.

Then came the path, and the walking of it,
And where the first ego awoke to its destiny among the stars,
The spiral walked, became a labyrinth.

As our choices multiplied, we created the maze.
Like Theseus we search for the thread
That will untangle our lives; the choice
That will conjure happiness, provide enlightenment.

What we forget is that choice is part of our illusion.
When we focus on walking the single path,
Under the maze we find
The meditation of the labyrinth.

This site tries to echo that reality. It may seem like a maze, but in the end, whatever path you choose, it is the following of that path that takes you to the centre.

Whichever path you chose, thank you for your patience, for your interest and for your indulgence in letting me lead you this far.

I hope the trip was worth it.

It’s still out there somewhere, for the moment.