““Yoga” will not on its own protect your shoulder or your environment unless you use it specifically to do those things. And if you do, you’ll need commitment and training above and beyond what yoga pedagogy typically provides. If yogis want to be uninjured on the biomechanics front, yoga needs physios, osteos, neurologists and kinesiologists. If yogis want to be at all relevant on the cultural front, yoga needs anti-oppression educators and activists.” 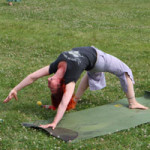 Let me tell you a few honest things: I love Wild Thing as a pose. It feels awesome and it’s easy for me to achieve. It helps me feel free when the mundane world gets a little too much. The news that long-term, repeated practice of it will damage my already hyper-mobile shoulder joints means that I will just not do it quite as often. I run, and I await the day that my Achilles’ tendons have finally had enough of the punishment. It’s that or the knees. Latest studies show that whether you heel strike and stride; or forefoot strike in the barefoot style, nothing will protect you from the impact of running forever.  I love ecstatic dance, but I can’t dance with a teacher who encourages us to ultimate freedom, because I know I need little encouragement to overdo it. Still, I’m kind of disappointed if I don’t hurt the next day. I limit my meditative and journeying work, because even my inner guides know too much leads me to become emotionally unstable and distant. Truthfully, many of my practices are based on the premise that I can only do so much before they will hurt me. There once was a time I applied the same principle to entheogenic substances as well.

More honesty then. I don’t like deeply manipulative forms of massage, such as Thai yoga massage. I think it’s actually dangerous to hyper-mobile, neurologically sensitive systems like mine. I also think hot yoga is about as far from my personal conception of what the practice is about as I can get.  There. I’ve said it. Sadly, one corollary to the epidemic of positive thinking in the world of bodywork and alternative spirituality is that we are taught to respond to negative feedback from within or without, as if it has nothing to do with us. Indeed, the common aphorisms of our time tell us things like:

Your life is your own. DON’T waste it trying to be what others expect you to be. DON’T sacrifice your happiness to make everybody happy. DON’T give up on your dreams to build other people’s dreams. Be who you want to be.

And then there’s the ever popular Four Gates of speech. (Is it true? Is it necessary? Is it kind? Is it timely?)  We have spent a lot of time in our communities watching what we say, taking care not to say anything that can hurt anyone, and throwing out Facebook quotes filled with positive rainbows to keep the darkness and negativity at bay. But a mature community doesn’t work like that. Real community and real spiritual development is messy and it often hurts. Any process of growth hurts. The four gates are a useful shorthand for mindfulness, not absolute commandments.

But they tell other people. Yoga classes are full of students who have left one particular system for another. As an Anusara teacher, it validated our system that we were rehabilitating significant numbers of former long-term Ashtanga Mysore students with shoulder problems; adding extra refinement for those students who had reached the end of the road in their understanding of the Iyengar system; and retraining the joint-supporting musculature of endless numbers of hyper-mobile ex-dancers and gymnasts. Too many years passed before I began to wonder where the injured Anusara students were going next. Now, of course, I know, because I am one of those former students. After half a decade of this strong vinyasa practice, I could feel my hyper-mobile joints begin to weaken, as my muscles became too tired to support them any longer. Honestly, I was just tired all the time. In this time I had watched fellow teachers develop significant and chronic conditions in shoulders and lower backs.

There were things about the structure of the organisation that we were equally concerned about: legal and moral issues about how teachers, students and anyone who criticized the system were being treated. When we complained about any of this – the safety, the social justice, the income inequalities, the lack of anything other than white faces around us in trainings – we were called a ‘vicious, vocal minority’. We were ridiculed as grumpy Women’s Studies graduates who were unable to open to the divine ‘grace’ and infinite ‘freedom’ so humbly shared with us. Former colleagues kept reminding us about the four gates of speech and positive thinking. Anusara became, and remains either wholly perfect, or wholly corrupt, depending on your partisan position.  Either way, the actual criticisms of the system and its organisation, and above all what it meant for yoga as a whole were rarely engaged with. In the meantime, the vicious vocal minority healed, we learned, and above all, we moved on.

As a wider yoga community, we still haven’t learnt how to handle criticism. And yet, we are facing major growth pains. Hatha Yoga was originally a system that mortified the flesh in order to transform consciousness.  The idea that it could be medically therapeutic is relatively recent; but not as recent as the now commonly held perception that yoga is always safe and appropriate for everyone. I’ve had new students arrive for a general class with hypermobility, arthritis, depression and a dozen more major conditions without warning and with the happy assumption that they can be safely accommodated within a group environment. Often, their doctors have agreed with them that yoga is gentle and rehabilitative.

Currently I am following the development of Matthew Remski’s WAWADIA project with equal apprehension and excitement, as he maps real world research into the injury profile of our precious yoga culture:  He has introduced me to the valuable research of Dr. Awan. I have learnt the humbling fact that although you’re less likely to injure yourself doing yoga than many other physical activities; the majority of yoga injuries are found in female teachers with long-term vinyasa practices and an average age of 40. I fit the profile of the yogic practitioner most likely to injure herself, and yet it’s my job to teach other people how to stay safe. One clear finding already is that ‘listening to your body’ is not enough to protect you from long-term, chronic joint degeneration, because the body has no useful neural or other feedback mechanism to provide that information. And if you’re reassuring yourself that awareness of your subtle or energetic bodies will protect you, try starting this post again from the beginning.

Although Hatha Yoga is an ancient system, it is increasingly accepted among scholars that its most rapid growth was within a context of social and political inequality. This development was both an overt response to British imperialism; and a subtler reinforcement of caste and class inequality. The rapid expansion of the Modern Postural Yoga it birthed is also the child of late stage capitalism and neo-imperial exploitation. Your yoga is not, and never has been, free of that context. Projects such as Decolonizing Yoga are starting some very difficult conversations within our international community.  Yet it’s very hard to accept that even with the purest of intentions, what you offer as a teacher or therapist is part of a process that includes inequality, commodification and even violence. (Teachers of the Sivananda lineage, what you do is awesome, and you probably feel none of this applies to you. Please read this book.)

And if you’re reassuring yourself that your karma yoga project or your donations-only community class frees you from ever thinking about this stuff, again, try reading this post again from the beginning. But don’t stop there. You may be the adherent of an ancient Eastern martial or healing art and believe completely in its ethical and authentic, unbroken line of transmission; yet have never met anyone from the country it comes from. Your therapeutic knowledge of anatomy, physiology and injury may be gleaned entirely from CPD courses, and never brought you into educative contact with a real medical specialist. You may have been taught that a particular form of meditation practice has no contra-indications, and never thought to check that out with actual mental health professionals. Whatever your body work or spiritual development system of choice, whatever you’ve been taught, check your bias, your privilege, your limitations, and check them with people who have no investment in seeing that particular system thrive. And if your organisation doesn’t support you studying or researching outside of itself, what are they afraid of you finding out?

I know that you work hard, probably for little reward, and with even less support. I know that well. I know that your students and clients love you, and love what you do. Their positive feedback is what keeps you going – that knowledge that you do good in the world. And you do. We do. But we can do more. It’s time we grew up, stopped trusting the universe to provide all the answers, and started to actively seek out negative feedback. 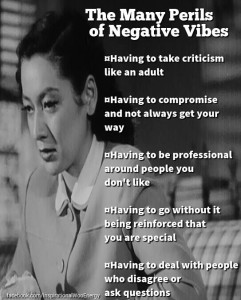 ← Portraits to a purpose
Across the gap →