by Theo Wildcroft on 9th October 2014 in Blog

I’ve spent most of this week writing a 3,000 word submission to Patheos’ upcoming ‘Pagan Consent Culture’ anthology, and now it’s time for another blog post. I also have a space now on the OU site for my own little blog presence as a ‘junior researcher’, so in future some of these posts might appear there. I haven’t really even begun to work it all out yet, but it’s all very exciting! So today I’ve taken a couple of hours off to mine old websites and posts again, sifting out little gems of curiosity for my nostalgia and your amusement.

I am lucky to have two parents interested in genealogy, and their research has had interesting results. My mother’s line traces back quickly to small Derbyshire hill towns and villages, and it seems likely to have originated there, passing under the hills themselves in mining times. My father has traced his back to the Peerses of Bosham, suggesting a descent from Saxon invaders…I mean settlers. Definitely settlers. They all took up farming for the longest time. 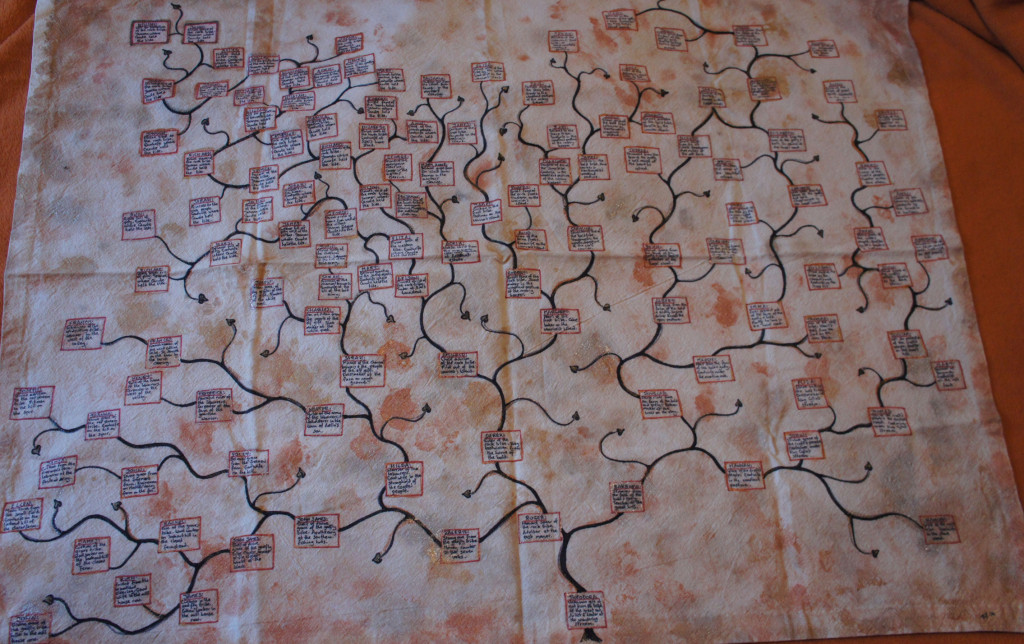 I’ve posted a photo of the results before. Here it is in higher resolution. Eagled eyed readers may note the interesting grafting of two branches of my mother’s family back together again, when three generations after Sarah birthed Richard and Elizabeth, their descendants Albert and Emma married and birthed my great-grandmother Maggie. I think that’s okay, three generations, isn’t it? It’s not too ‘kissing cousins’ for comfort. And although there are many missing members here and there, many names on my mother’s side in particular are links to some fragment of a life story.

I created this family tree with a little etymological magic. The first names of all my discovered direct ancestors are followed where known: by the meaning of their name, their profession and the meaning of the place name where they lived. Thus Gervais Osbiston, wheelwright of Hazelwood becomes “Gervais: wise spear from the farm of the godly and bold. Wheelwright in the hazel wood”. I give Gervais as my example because he has the most wonderful name (he pronounced it ‘jer-vayce oz-biss-ton’ if you’re wondering). He and Hepzibah, Thirza and Douglas and the like, set off the never ending procession of ‘John or William Peerse’s on my father’s side. Gervais also had the most legendary and romantic (i.e. possibly untrue) life story involving a mother who was an unmarried maid in the Big House, although we don’t know which one she was out of five sisters; and a habit of lifting whole carts on his back to put the wheels back on. He went on to raise his granddaughter when his daughter died of a broken heart after her man went off to Australia to make them a new life and never came back for her. And yes, the interesting life stories do not end there, and I am present in the genealogical record I’ve just linked to, but not with a name you will recognise. That’s a story for another time.

It is not a full tree of course, although my father traces his father and his father and so on all the way back to the 11th Century, which is a very long way in the geneaology of everyday folk. I painted it onto canvas because I feel I am very lucky to have it, and wanted to honour it properly. Mum did try to begin on my husband’s genealogy, and got rather cross about it. Apparently someone wasn’t telling the whole story of their origins, because the Costelloes unhelpfully disappear from detailed records a generation or two back, “possibly to Ireland or maybe Italy”, which isn’t the best information to go on. For a start, there’s the final ‘e’, which the family is adamant should be there, but there’s evidence it was added just two generations ago. Phil of course doesn’t care, and it’s at least as much fun to imagine as to know for certain.

Of course, genealogy has become a lot easier with recent developments in both software and data access online, but most of this was gathered the hard way. I also have the neatest of low-tech maps of the many homes of my two ‘tribes’ that I plotted out a decade or so ago. Of course now I’d put it together in Google Maps, but it still looks cute like this.

And there are these words, which I’m rather proud of on re-reading:

← Membership, involvement and ethics
Coming together →