by Theo Wildcroft on 4th December 2014 in Blog, The Experiment, Yoga 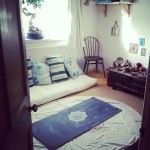 And so it begins. The Wild Yoga Experiment. After a heroic effort, mostly by Mr. Phil, our house has been turned around, and I have a yoga sanctuary large enough to fit more than one person in. It will have a lick of paint and a couple of bits to be finished, but I’m already sitting here as I type this, and it feels great.

And so last night a half dozen of us gathered for the first ‘satsang’ session, and set the scene for a project that will run all the way to next July, at least. Alex, Carol, Helen, Jill and Sue joined me, and I know there were more in spirit. For them, and for myself, and for those who couldn’t make it, here’s how it went.

We began by welcoming each person present by name, as well as whatever quality they were bringing with them into the space. We joined hands and spoke: “With great respect and love, I honour my heart, my inner teacher”. We massaged our feet and made sure everyone had tea and cake to ground us into our bodies and the space.

I talked about the democratisation and evolution of postural yoga practice – how hatha yoga was created in a medieval flowering of practices to effect the alchemy of the physical, human (and exclusively male) body into a divine form. How there was much to be celebrated in this expansion of the idea of spiritual realisation from the elite Brahmins to (half of) the mass of humanity; and also much to be avoided, in the strange mortifications and torturings of the flesh to achieve these aims. I explained how, in the late 19th and early 20th Century, there was a deliberate and concerted campaign to revolutionise, systematise and sanitise these practices in the (re)creation of an indigenous Indian physical tradition. How a small number of men, involved in this development, drew on practices as diverse as body-building, indigenous martial arts and Swedish gymnastics; and redrew ancient Tantric and Vedantic philosophy in the light of their knowledge of modern European enlightenment thought, medicine and science. How this process of syncretism, common to all religious and cultural practice, allowed for the indigenisation of yoga as a newly authenticated ‘ancient’ practice of India; and in turn packaged and extended yoga for its explosion onto the international stage.

All this to say: that before yoga was an internationally beloved interpretation of an Indian cultural treasure, yoga had already become an Indian response to the spread of international physical culture and philosophical thought. All this to say: the men we most have to thank for that repackaging of yoga for a ‘Western’ or western-facing population, are those Indian nationalist pioneers – Krishnamacharya, Jois, Iyengar, Sivananda, Desikachar, Yogananda and others. All this to say: the most hyped, most recent, most commercial fads in yoga today take their cue from Sivananda himself, giving out his guru’s grace in initiations and spiritual names by post to Westerners. All this to point out: that these deeply profound men, for whom we are truly grateful, claimed dubious ancient lineages, divine inspirations and direct transmission of spiritual/physical knowledge into their hands, and obscured their own roles in substantially innovating these practices, and the interpretations and commentaries on the ancient texts that underpin them. They did this as a way of infusing power, prestige, mystery, exoticism, scientific validity and thus their ongoing control over their creations. And thus here we are, at risk of calcifying ‘real’ yoga into supposed ‘ancient’ forms as a reaction against what we intuitively feel is yoga’s slide into hybridism, endless diversity, commercialism and irrelevance as a spiritual discipline.

Authenticity is not to be found in the age of the practice; nor in the deceptively elegant principles of simple, ‘universal’ philosophies and alignment. The profound sits alongside the mundane. For a practice to be authentic, it has to be yours. Medieval yogis developed hatha yoga as a tool to render the human body divine. Early modern yogis repurposed hatha yoga as a tool to create a strong, prosperous, conservative and healthy Indian population, fit to meet and succeed in the challenges of international, modern capitalism. Later modern yogis have rewritten hatha yoga once again, in a neo-Tantra, New Age, international, commercially aware pyramid scheme of glamour, anti-aging and material success underpinned by the cult of positivity and beauty-as-truth. Align your body, and you too can perform effortless gymnastics. Align your heart, and the universe will bring you everything you need. This development of hatha yoga is both radically new and entirely in keeping with what came before it.

What I see now, in certain circles largely outside the commercial mainstream, is yet another repurposing of hatha yoga: blending it with ecstatic dance, paganism, bhakti and Buddhism, to achieve something new again. What that turns out to be, and how it works is the focus of my research. The point is that it is still yoga.

I am passionate about recognising the production and transmission of embodied spiritual knowledge/practice by individuals within their communities. Whilst we honour with profound gratitude each and every teacher that has held and added to a lineage to pass it along to us, what is vital is that we learn to trust our inner teacher, and that we learn with the support of each other. For decades at least, groups of (mostly) women have been sharing physical-spiritual practice this way. For decades we’ve been calling it ‘yoga’. The Wild Yoga Experiment is my way of honouring, cherishing and developing that inner teacher and that circle.

Most of us in the circle last night admitted that we began coming to yoga for superficial reasons, and that the reasons why it meant as much as it does to us are complex, even contradictory. There are tensions around beliefs – around opening up to a spiritual aspect of practice when almost all of your formative spiritual experiences are tied to other people seeking to control what you believe. We talked about jnana yoga – the yoga of knowledge. We talked about bhakti yoga – the yoga of devotion that does not, in its modern, Western form at least, ask any belief of you at all.

That there is a way to open your heart to the miracle and beauty of the universe without assuming the nature of what created it: this is powerful. That there is a space and a way to practice in which you can open your heart to the mystery and perfection of the universe whilst at the same time not losing sight of the certain knowledge that there is much to fight and change in the world: this is powerful. That there is a way to prepare and support each individual in being a ‘better’, more engaged, more effective person without imposing a definition of what ‘better’ means upon them: this is a community’s life-work. That there might be a way to do all this whilst at the same time recognising the permanent near-exhaustion of our lives; whilst honouring and holding and cherishing the notion that you are already enough and you are already home: this could be a revolution.

This is why the ‘vinyasa’ sessions will be an attempt to challenge your existing patterns of holding and being and moving; whilst at the same time encouraging you to find your own practice and your own pace of change – your own needs, desires and expression of stillness and movement. I am well aware of the panicky, glazed eyes that most students have at the idea of ‘free’ movement, especially in company. There will be help. There will be smiles and light-heartedness and gentle encouragement. There will, above all, be good company to risk it together in.

So, then, the questions we are asking are:

I had already primed the blackboard with a few words as targets for transformative processes – some of them more challenging and provocative than others.

These words deserve savouring. As a whole, I am struck today by how epic, how touching, how vital they sound. Each one resonates with a story behind it. It bears repeating: this is what we hope from our practice. We silently chose one each and meditated alone in circle with them. I drew the meditation to a close by singing a few minutes of Hari Pyari’s ‘Aham’: the words of which mean simply ‘I am love. I am divine’. The circle had the choice to join in, and mostly did. We joined hands again, and Jill and Sue, as guardians of the project alongside me, led the way in honouring the spirits of place. We quietly, collectively, named all those seen and unseen, human and other, who contributed to us being there that day. I led the circle as one by one, we announced: “Into this space I offer…” – in my case a mild level of obsessiveness. We ended the ritual with the druid’s prayer:

“We swear by peace and love to stand
Heart to heart and hand in hand
Mark, o spirits, and hear us now
Confirming this, our sacred vow”

Finally, as the night grew deeper and ten o’clock ran towards us at speed, we chose from the words given five themes for the sessions. For each theme, there will first be a vinyasa session, and then another satsang session to share and evolve our understanding. It is perhaps worth reminding ourselves that the holistic reflection-upon-action (satsang) and the awareness-of-action (vinyasa) is one way we can usefully define yoga as a practice. As this is an experiment in community development of knowledge and practice, it depends from now, on all of you. There are many ways to join the conversation:

There will be more blog post reports after the sessions, and I will share what I have in the way of session plans for those who can’t make a particular theme but really want to try at home. In the meantime, here’s those themes, and the rest of the dates:

What does fierceness look like? Can we channel positive anger? How do we burn for change?

When do we slow down? How do we balance staying wild with taking care of ourselves?

Where is the wellspring? How do we bubble up? What does it feel like?

What’s at the heart of it all? Where do we sit with what we don’t know and discover the magic in that?

Personally, I am nervous about offering up a process to meet such an agenda. But I am equally aware that my only task is to hold the space and find some tools. It is as a community that we will be taking the journey towards answering these questions. I will see some of you at Rowde, 8pm, Wednesday 17th December for the next stage. I hope to see many more of you on the path with us sometime soon.

With love and gratitude to all those who make this possible,

← Losing it all
Satyananda yoga: Burn the house down →