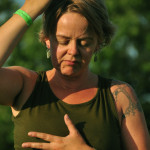 When I do my physical practice, the relationship between the two fundamental rhythms of breath and heart set the pace. But I love music, and love the way music can take me into a different place – a different way of moving with my body. And at times, my ‘yoga’ practice has more in common with the free movement of dance.

Over the years, I’ve danced with skilled teachers such as Dawn Morgan and Sue Kuhn, Anjali Kaur and Hari Pyari, who use the pace and feel of music to take a group on a journey through ways of moving. All are influenced by the remarkable work of Gabrielle Roth, who sadly died last year. Her ‘5 rhythms’ of flowing, staccato, chaos, lyrical, and stillness, have flowered into the many different forms of ecstatic dance practice we enjoy today.

So the playlists I use are carefully chosen, evolving over the years of my personal practice and my teaching. And different aims makes for very different playlists. When I discovered 8tracks.com, it became so much easier to share those playlists with others. You can listen to my 8tracks playlists even if you don’t own the music yourself – it’s like internet radio with each user being a DJ. It does mean there are restrictions on what can be uploaded, and what you can do as you’re listening – you can’t skip a lot of tracks, for example. And if you want to know what the full playlist is, you have to make a note as you go.

For your interest and personal joy today, I wanted to share some of those playlists here, and how I make them. You’ll also see who my favourite musicians are – which are the albums or tracks I use again and again. They come in three kinds – music for teaching general yoga, music for specific teaching purposes, and music for home practice. If you already follow me on 8tracks, you might not have noticed that I uploaded 5 new playlists this week for home practice – as my gift to you. Finally, I wouldn’t even know about half of this music if it wasn’t for Phil, who casts an eye over each one when it’s done, with helpful suggestions born of a lifetime’s love of music.

Playlists here are about 90 minutes long, and build from a gentle beginning to more rousing pieces, down to relaxation tracks at the end. There are few recognisable beats, dramatic changes in tone or obvious lyrics, because the music has to adapt to whatever I am teaching and how the class feels on a given day. But there are themes – each playlist is chosen to be appropriate for a different ‘term’ or time of year.

2: Music for a Specific Purpose

I have three playlists here. One is a little stimulating but gentle, for when I’m working with children with special needs who might enjoy being energised and uplifted. This is a great playlist for anyone who’s being kind to themselves today. The second playlist is very gentle and calming – mostly rolling ‘oms’ – for children with behavioural or emotional challenges. Because children like this tend to spend much of their day around other children in a similar state, I try to make my time with them as calm and spacious as possible. This is a great playlist for rest and renewal. Finally, there’s a playlist for the new ‘Wild Yoga Experiment’ – this one is more of a journey, being 2 hours long. It takes us from led movement to free movement to prayer and coming together.

These are my most recent ones. They have a lot more to interact with than the other playlists. There’s one for each of the five yogic elements, as a way of changing the musical support to my practice depending on the dynamic of the day – how I’m feeling and how I want to feel, or where I am and where I want to be. Earth is strong and steady. Water just flows. Fire is spiky and bouncy and unexpected. Air is lightly lyrical. Akasha is spacious and full of stillness.