Big themes collide like icebergs in my thinking this week: ideological clashes; inspirational conversations; memories recalled; histories remade. I give thanks for a new space of solidarity; and to Matthew Remski for supplying the defining thematic for my week – neoliberalism as religion. I’m realising how deep run the threads of hyper-individualism, consumerism, flattened difference and above all, grief and lost salvation. So much grief. So much trauma. So many talismans and magical tokens held up against the darkness.

I know that this must be sounding fairly impenetrable – and it is. I’m still weaving the threads into something recognisable, and this is a large part of my thesis being born here. So let me just give you a couple of the pieces, the fragments floating in my psyche. The links between them might be obvious, or obscure to you.

A reading, then; of a classic article (thanks to Phil Wildcroft) –

“Most people, historically, have not lived their lives as if thinking, “I have only one life to live.” Instead they have lived as if they are living their ancestors’ lives and their offspring’s lives and perhaps their neighbors’ lives as well. They have seen themselves as inseparable from the great tide of chromosomes of which they are created and which they pass on. The mere fact that you were only going to be here a short time and would be dead soon enough did not give you the license to try to climb out of the stream and change the natural order of things.” Tom Wolfe 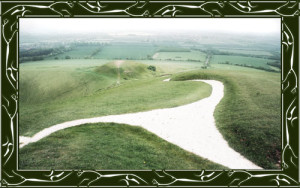 And an old story, in more ways than one (be gentle, I’ve never shared this before):

“…So there we were all in one place, a generation lost in space, and no time left to start again…” ~ Don McLean

In 2002, the day they scattered Alex’s ashes, the witches came in droves. They took calm and capable charge: crystal healers and reiki masseusses; priestesses and teachers; shamans, druids; trip mother and earth mother; sisters under the Goddess of every hue and shape. The tribe gathered around them: rave crew to cyberpunk to travelling squatter; to mark the passing of another life lost too young. Alex died in city streets, another body smashed in speed and carelessness. It was a world away from the earth and wood and stone that surrounded them now, and as she watched the ash blow out to other hills, there came a bitter clarity, a widening of perception: taking in her friends, her lovers, her broken family; the London scene on tour. She thought: ‘We come here to reclaim what was never given to us, to touch what we feel our ancestors felt, tasting a spirit of place on the wind.’ She thought: ‘And yet, even here, we are still like wild animals born in captivity. You could set us loose, but do we know how to be free?’

It was a dangerous time. A generation born to hippies reformed had discovered themselves as outlaws. She had seen her own Summer of Love, and seen it stamped down. Road protests, free parties, Reclaim the Streets, the great Mayday extravaganzas, every glorious fiesta had been tarred and painted black. They had been photographed, databased, targeted, arrested and threatened: condemned as dangerous, anarchist, drug taking terrorists each and every one. Never mind that the issues dear to their hearts were food safety, sweatshop labour, the sale of landmines, pollution, or the new roads tearing through their communities. Terrorists. We were all terrorists then.

So when Sarah offered her a little piece of time and space away from everything, out in the fields, in a house full of cats and home-grown food, among the sound of laughter and humming and birdsong, she surprised herself. She went. It felt like a refuge, and she stopped checking email, stopped checking the news, let the battery on her mobile phone run dead. She did not call work. They had given her no loyalty, and so she returned none. She baked bread and pulled weeds and read books: did all the things most of us do when our lives and jobs and loves and family get too much to take. She drifted. She remembered: under the skin of our lives; somewhere deep and early, forgotten, don’t we all follow the same dreams?

At the end of the first week, they packed the van and drove up to the first free outdoor party of the season: high up on the Ridgeway. She danced and talked and sat and listened, the music clear in the open air, and she vowed, as always, never to trip indoors again.

Ecstasy is a fickle drug. The purest pill can merely tickle the edges of sight and nerve if the place and time are wrong. She sat alone, taking herself out of the circle, the dancing and the conversation, oblivious to it, following a different beat. When the rush came, it was a memory of birth, a replay of time beginning. First, from the void, awareness. The newly strange sensation of a heart beating. The sound of blood. She became aware of breathing, of the rhythm of the heart and the rhythm of the lungs out of time, out of place, in conflict. Louder and louder the mismatched beat filled her head, filled her body. Panic and speed. An age of moments until a different self awoke and whispered: ‘I know this. I have been here before.’ The tingling of fingertips, eyes, sliding from vision to vision, eyelids strobing. Intensity, and suddenly, love. The fire and the music and the tribe dancing under the stars, came together as one and she exploded inside. She watched herself walk through the stars and knew the home we all come from. She knew that what we call reality is a trip that can be broken. She knew it was all a game, all a connection of spirit to spirit across the void, and as she laughed, she came to.

She was standing in the midst of the dancing, and he was staring back. Later, she said: “I could not tell you the colour of his eyes, nor the clothes he wore. He was made of firelight and shadow, but then, in that place, he was as clear to me as a face in the mirror. When he spoke, it was a whisper that carried over the heads of the people between us; through the breakbeats and the samples. He spoke from a place of silence; and from a place of stillness I listened. I asked him who he was and he laughed. He said: ‘Do you feel the world turning? The wheel is in motion. Change is a whirlwind, and you are the butterfly whose wings make it happen. Logic and reason and getting by and getting on was never going to be enough. This path has no course for you to chart. This is Chaos. This is Revolution.’ His eyes were bright and his breath came fast. I reached out to touch his face, and the Lord of the Dance was gone.”

She danced again, then. But his memory filled her, until she was spinning around the circle, checking for his eyes in every face, his laugh in every voice. It was a good night. As dawn came, chattering jaws and pupils wide like saucers attested to that. The tribe dispersed with embraces and mental notes to book the same rig, to reuse the location: to capture and bottle the spirit of that night. She stayed at Sarah’s for three more weeks; went to three more free parties. She searched until she knew she would not see him there again. She returned to the city, took another contract, filled her days with work and her nights with dancing. She talked of revolution and the fragility of the trip. She was bright with the belief that all it would take was enough people to want to take control of their own lives. She waited.

That Mayday, when they danced across all lanes of the M25, she stood in the streets and watched the tear gas roll towards her. Saw batons fly and cameras turn, and knew all the media would report once again was a riot of dangerous terrorists. A voice whispered in her ear: ‘This is the pattern of dying days. A people have to be angry enough to accept the blood and the pain of rebirth. These are…interesting times.’ She turned at his laugh, and was not surprised that he was not there.

She walked all the way home, packed and left that night. She is lucky. She knows someone with a disused barn. She works a little, and grows food, and learns to sew and tries to be as self-sufficient as she can. She says: “He is a Pied Piper, and when he comes, he will bring all the London rats with him”. She smiles when she says it. In the evenings, she sits in her doorway, leaning on the frame, watching the sunset, waiting. And as she sits there, she says she can hear the drumbeat again, as she hums the melody of samples and vocals. It is louder every night, she says, for every day he is closer.

“…Far from the twisted reach of crazy sorrow. Yes, to dance beneath the diamond sky with one hand waving free, silhouetted by the sea, circled by the circus sands, with all memory and fate driven deep beneath the waves, let me forget about today until tomorrow…” ~ Bob Dylan