I gave my first academic paper last week, just before solstice. It was even more nerve-racking than I expected! A couple of people have asked if they can read it. That’s a little difficult, because I have to make sure that:

But I want my research to be a conversation with other scholars and with other yogis and yoginis, and I’m excited about this paper anyway. So here’s an extract from it that shouldn’t get me into too much trouble! If you’re wondering, this is about half of the paper, which I delivered in almost exactly 15 minutes.

Bodies, movement, and lived religion: Issues in methodology and transmission 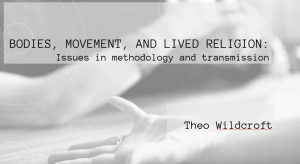 The aim of my paper today is not a review of the field, but a quick examination of the possibilities and limitations of the research. First of all, let me give you some context. The word ‘yoga’ covers a vast diversity of practice, philosophy and belief. The word itself has a sense of ‘discipline’ or ‘deliberate connection’, as in: a discipline of devotion (bhakti yoga); or a rigorous discipline of health (yoga asana); or a cultivated practice of social action (karma yoga) (De Michelis 2008: 17-18). 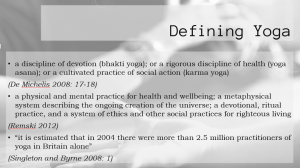 As the product-in-process of complex socio-political encounters between India and the rest of the world, in philosophy as much as practice, yoga is an equally complex, at times contradictory activity. It is either and at once a physical and mental practice for health and wellbeing; a metaphysical system describing the ongoing creation of the universe; a devotional, ritual practice, and a system of ethics and other social practices for righteous living (Remski 2012). But by confining my research to asana, pranayama and meditation and those relationships and rituals that are daily engaged in by millions of people worldwide (Singleton and Byrne 2008: 1), I can at the moment usefully define yoga for the purposes of this research as:

A regular routine of self-conscious and somatically aware, ritualised, physical animation within specific, modern subcultures of practice that are linked to shared, if diverse beliefs, and engaged in complex relationships with the mythologies and ontologies of the Indian sub-continent.

The generative tension of the division between the physical and ritual aims of yoga leads us into common, but unresolved academic debates on both definitions of religious practice, and Cartesian dualism. In the forms of yoga I am researching, what is under consideration is ethics, relationship and authority; notions of the self, axiology, ontology and epistemology. For this reason, I would definite them as implicitly religious. This is lived religious practice.

“these are the doctrines, rituals, or signs that men and women have picked up in their hands and are using to engage their immediate world” (Orsi 2003: 173).

Therefore, at the heart of this research project are bodies, their movement, meaning and somatic experience. Unfortunately, we as scholars of religion are much clearer about how we study texts, and words, than bodies, movements and their motivations.

Yoga, like many oral traditions began with the guru-shishya, or direct teacher-apprentice relationship. Within an oral culture, this relationship is an invaluable method for preserving small amounts of sacred knowledge across generations, but it is inappropriate for a modern era, in which, as Matthew Remski writes:

“We have moved from an “exegetical” mode, in which our goal is to render old ideas with faith and reverence, to a “hermeneutic” mode, in which we are reflecting as much on the old ideas as we are upon how we respond to them” (Remski 2012: 23).

This long and overly romanticised history of direct teacher to student transmission, reinforced by repeated, long-term personal practice, is at the root of a feeling by many that true yoga not only cannot be systematised; it cannot truly be studied except from within (Alter 2005: 142) 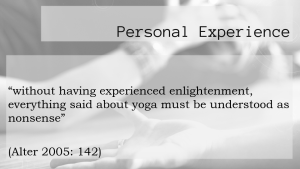 But arguably, the first wave of yoga’s reception in the West began with English translations and accessible commentaries on classic works of yogic philosophy (Singleton and Byrne 2008; Singleton 2010; Singleton and Goldberg (eds.) 2013)

The use of modern commentary on ancient text as a basis for modern religious authority is widespread in schools of yoga today (Brooks 2011; Dinsmore-Tuli 2013; Remski 2012).

Sutras that were concise in order to convey meaning in as few, easily memorised words as possible, lend themselves exceedingly well to diverse interpretations, supporting conflicting philosophical stances.

And three interpretations in English:

Yoga I would argue is not defined by the words of the text; instead the meaning of the text is defined by pre-existent philosophical positions, drawn from personal experience of the practice and its teachers. And thus if we look to textual commentary to discern truths about yoga, we are more closely examining its conclusions than its motivations.

Mark Singleton’s Yoga Body (2010) revealed the extent to which the 20th Century transnational dissemination of yoga practice relied upon the coterminous development of modern photography. From the classic images of BKS Iyengar in Light on Yoga (Iyengar 2004 (1965)), to Darren Rhodes as the literal poster boy for Anusara Yoga (Rhodes 2010), both accessible and aspirational photographs of yoga poses continue to inspire practitioners. But such images obfuscate their origins, and the physically demanding process of their construction. Meanwhile, there is a growing movement attempting to reclaim yoga imagery for a wider diversity of bodies, and a wider diversity of practice (Horton 2015; Klein 2014). 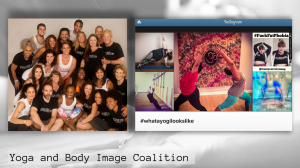 Another of Singleton’s persuasive theories is that the iconic ‘Ashtanga Vinyasa’ yoga sequence was developed as a demonstration tool for promoting yoga (Singleton 2010). In the modern era, video demonstration is a common transmission method.Today, ever-multiplying images of yoga enable a consumption of the practice via a gaze that can be appropriative, ahistorical, neo-colonial and even unsafe.In images of all kinds, yoga culture maintains a troubled relationship with ideas of performance, internality and universality. 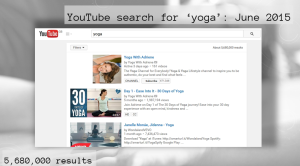 Direct teacher to group, and peer to peer relationships are the most established and arguably the most respected methods for the modern transmission of yoga practice.With regards to physical asana, this process includes verbal instruction, metaphysical framing, visual cues, and physical adjustment, but mostly it involves repeating movements and positions, feeling their perceived psycho-physical effects, and subsequently internalising them into implicit physical memory through repetition.

What is privileged in the method of transmission has significant connections to my methodology.

For example, early modern postural yoga preferred poses that are easy to represent in photographic form, and feature an aesthetic that was pleasing to a sub-culture promoting an image of strong, healthy Indian manhood. But when we watch the movements of non-orthodox yoga practice today, something of the evolution of modern yoga is revealed. Here’s a simple asana usually known as ‘cat/cow’ in classic photographic form. 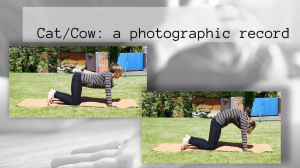 But with video, we see more: how this is a rhythmic movement; and how in some practices it evolves into free movement. Video evidence has more depth than the photographic, but fails to approach the practitioner’s experience of the practice.

Does moving like others help us to understand their experience? Maxine Sheets-Johnstone makes a strong case for mimesis as the basis of developing empathy itself, in infant, adult non-verbal and even inter-species communication (Sheets-Johnstone 2011, 2012).Simply stated, we sit like others and move like others when we want to attune to their state of being. 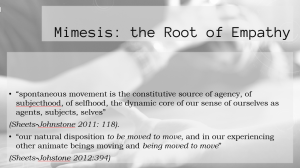 So my own research methodology will need to involve elements of all these techniques: participant observation, interviewing, and recording and analysing movement.