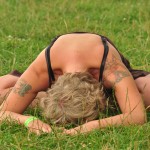 So here I am, packing again, and reflecting on what makes this time feel so tough. The weather is grey and humid, the forecast not great, and I’ve just sent off my husband and cat to one field, as I prepare for life in another.

Timings are tricky. The British summer is short, and with only so many weekends, some camps will always overlap. This year, two of my fixed points of the season align perfectly – SuperSpirit and Santosa. Phil is off to the former, where I will join him after 5 days at the latter.

The truth is, I’m tired. In the ten days since my last camp, I’ve taught half a dozen sessions, had meetings, written an important paper, and done my first pilot research interview. That’s a lot to process, on top of recovering from one camp and preparing for the next.

The truth is, I’m torn. Two camps, two people at the heart of both that need my support. Two groups of friends, two places to be. Instead of leaving with my partner, or from him, I’m left here to finish up and pack for one trip, whilst hoping that I sent him with enough for the second.

The truth is, I’m split into so many roles now. Negotiating the braided identities of student-teacher-seva-camper is plenty, only this time I’m both conducting fieldwork and representing the research as well. Santosa will be a camp, for me, at the sharpest end so far of my identity as practitioner-researcher; participant-observer. I simply cannot do justice to this process unless I am wide open – vulnerable to the experience, and uncompromisingly self-honest about my responses to it. By the time I leave, I will be changed in unforeseeable ways.

For Santosa’s sake over the last few months I have maintained a spreadsheet of teachers’ details and taken charge of a modest social media sharing policy. Once onsite, I will also be leading morning yoga sessions and delivering yoga nidras. I will talk about the research, and watch and reflect and write fieldwork notes every day. But I also look to Santosa as a gathering for the exchange of information and practice with other independent teachers. So I’ll be looking out for inspirations to bring back to my own students; and my own practice too. Every session I attend or lead, every conversation I have, is fertile ground for my growth as a teacher, as a student, and as a researcher. I need to conduct myself ethically in every role. I need to serve my communities well. I need to stay in honourable relationship, as I dance this difficult dance.

What makes the situation even trickier, is my awareness that most of those practitioners who step into the role of researcher are not well-treated by other yogis, on the whole. There is a clear and evident tendency for yoga researchers to be dismissed as mere ‘academic outsiders’ – their whole personal history as yogis and yoginis erased as a way to diminish the import of their theses as unfounded on any ‘real’ knowledge of the practice. Despite living and breathing and reflecting on these practices for years before we even begin our research, despite agonising and debating for months on the most accurate ways to evidence the lives and practices of those we research; still in the end we are painted by many who do not know us personally as making pronouncements on behalf of others; seen as having far more role power in the exchange than is actually the case.

The truth is, academia has long since moved away from the grand statements, sweeping theories, and, above all, comfortable funding levels of the past. These days, especially in the humanities, most doctoral researchers are self-funded and driven; spending long hours teasing out the complex, partial, deep knowledge inherent in their subjects. As a natural result, many of us are intent on telling the stories of our own communities – that which is already as vital a part of our own lives as breathing. Our PhDs are the hard-won products of our obsessions.

The pressure was enough to spoil my sleep last night, and to fog my thoughts this morning. I knew I had to write some of this out to clarify my thoughts before I left. By this evening, I will have finished my admin duties, pitched my camp, checked if there are any little jobs still to do, dropped into the deep dream of a yoga retreat space, and no doubt discussed my research a number of times. Tomorrow at 8am, I deliver my first session teaching.

Although the camp will be nurturing, inspiring, and joyous, what it is unlikely to be, for me, is relaxing. And this holds true for anyone in the thick of working a camp like this, in any meaningful way. Being closely involved in running camps myself, I understand the intimate, unseen stresses that will be running through both camps today, as they set up. This is why I’m stalling, here, at home, writing field notes before I’m even in the field.

Not least is the last-minute, horrible concern over ticket sales. Being financially responsible for a camp is a tricky affair. One might assume that money is held over from year to year – that the camps have some sort of financial stability. I don’t know Santosa’s financial details specifically. I’ve declined any real decision-making role there, because that would be one too many roles to negotiate. There are lines of complexity in these relationships I feel I cannot ethically, safely cross.

But most camps I know promise money to a lot of people, every year, and every year simply hope that enough tickets sell to cover the costs. These costs will easily run into thousands of pounds, even for camps that will never seek to make a profit. Most will feel blessed in good years to have a little to spend on new infrastructure; and be grateful in slimmer years to have enough to cover personal expenses. And yet, the camps that survive run year on year. It is Santosa’s tenth anniversary this year. SuperSpirit has been running for even longer.

This is important. It tells us a lot about the kind of people at the heart of these camps. They have some form of faith – in their communities, the universe, or the gods – to make everything turn out okay, every year. These are the optimists of their communities; as well as those who work the hardest, and who step into roles of service and responsibility. Often, in my experience, they are quite airy and mercurial themselves. The steady, grounded people they gather around them anchor those wild dreams and make them happen. They make the water run hot and the parking make sense. For me, that’s usually my husband’s job.

Either way, it’s not unlike the position of the insider-researcher. We step up, unasked and unbidden, to serve our communities. Few will ever understand what it takes to do so. But few will understand the rewards, either, or the unshakable desire to step forward. As for myself, I fell into both roles, and once in them, made them my own. Just as a friend once said to me: “Look Theo, either write a book on this, or do a PhD, and in either case, I’ll support you.” Just as I once found myself looking down a list of facilitators, talking about plans for next year, and said “Look, am I co-running this camp with you, now? Is that what I’m doing?”

Because one of the aims of yoga is ‘sukham’ over ‘dukham’– the cultivation of ease over discomfort. Anyone can find ease curled up in their favourite comfort zone. The point of sukham is how we find ease in ever more difficult circumstances. For me, the point of sukham was first finding ease in my skin – in breath and being. This was a difficult challenge, given my history. I progressed to finding ease in physical expression – in pose and movement. But eventually, even the most gifted asana practitioner finds themselves at their personal limits, especially given that the length and depth of personal dedication needed translates into years of wear and tear on the body. There comes a time to all of us when certain poses are retired from our repertoire, and subtlety and intimacy in practice becomes more interesting than endless peak experiences of bliss.

I now believe that the most gifted practitioners move beyond this, into a practice that supports finding ease in service and justice. What I want to know now is not whether you can nail an unsupported handstand, or meditate with perfect clarity for over an hour, or how many times a day you sing the name of your gods. Instead, can you bring, and even share ease to the front lines of human suffering? The centre and edges of my own practice have shifted. What happens on my mat is both support and celebration – an act of reaffirmed faith with the world I trust to catch me every day, as I reach ever further. But the process of personal evolution now often happens elsewhere – off the mat, and into the world, as they say. I try to bring gentle, open ease directly to troubled places, troubled people. I try to shine a light on the stories of those around me; those who most inspire me, so that they may inspire others. I dance as lightly as I can, juggling ever more complex roles. Because my religion is less and less peopled by archetypes and grand forces, and more and more by the human and other-than human multitudes around me.

For those that meditate with the victims and perpetrators of violence; for those that hold ritual space for hundreds with a walkie-talkie on their belt; for those that sing out ‘Om shanti’ on the barricades – yours are the stories I want to tell. Yours is the sukham I seek. And to do this, I will dance, again, with the braided and conflicting needs of yogini-teacher-researcher, through these poignant, Autumn-tinged days of late August, with eyes and ears and heart wide open, with my whole self, with you, and with the world.