by Theo Wildcroft on 28th September 2015 in Blog 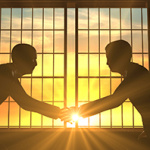 It’s instantly familiar, that slightly disconcerting feeling of being on a full and working campus out of term, with administration quietly buzzing and car parking at a premium, but empty halls, cafeterias and walkways echoing. We conference academics are a scattered tribe, coming from all points, to settle for a few days on borrowed land haunted by the rhythms of its usual undergraduate inhabitants.

Every human gathering has its rules of engagement; its small rituals to guide participants in to unfamiliar environments in familiar ways. The BASR [British Association for the Study of Religions] conference is no exception, with its name badges and welcoming coffee on landing. But having arranged to meet at check in, we in the bursary group are a little thrown by two procedures – once for the conference; once for accommodation. Our report, then, is being written at a distance, by a team that never quite met all together at once. These are my own impressions.

If the conference has a defining theme, it is the fifty year anniversary here, at the University of Kent. As a result, much of the flavour of discussion and debate is how far the discipline of Religious Studies has come; and with the recent REF results (‘Research Excellence Framework‘ 2015) and the immediate crisis of a proposed closure of the Religious Studies department in Stirling (BASR 2015), where we might go from here.

Despite that unity of purpose, our field, and therefore our membership, is a small but diverse one. Theologians discuss amicably with anthropologists; classical and literary specialists debate happily with researchers into lived religion. There are members and non-members of the BASR; professional academics, independent researchers and early career doctoral candidates. The tone of discussion is friendly rather than cliquey; and the only real cultural separation of the event is the informal evening quiz, which divides us on generational lines, leaving those of us born after 1965 amusingly at sea.

As we settle into the rhythm of plenary and panel, food and networking, some have more administrative concerns. Two AGMs are held. For the BASR, Graham Harvey and Bettina Schmidt are honoured for their service and shuffle committee seats to make way for a new President and Secretary. If, as Graham recently wrote, religion is the negotiation of ‘food, sex and strangers’ (Harvey 2013), I wonder how this applies to a gathering of researchers into religion? Our accommodations are certainly more monastic than hedonistic: functional, clean if tiny cells lit by fluorescent light. And outside of sharing papers, our main shared task is the development of our community of practice (Wenger 1999): making and affirming amicable connections in loose knots and networks, physically forming and reforming around buffet lunches, coffee breaks and evening drinks.

Like most conferences, this one runs not just on the nutrition, but the mental stimulation of food and drink. Offerings may be carefully labelled according to dietary preferences and intolerances, but everyone fuels both thought and speech with caffeine and sugar. No break is complete without it. As someone who works with, and researches, bodily practices, the effect is as fascinating as it is unsustainable. I struggle to find space and stillness in the schedule to recharge, and on day two, a group of us break free for an hour’s walk to breathe clear and warm our bodies again.

I know that some schools and centres have started to include short shared practices of movement and stillness into curricula that aim to nurture the whole body, and not the disembodied mind. I am reminded strongly of Richard Carp’s critique of the disembodied academic body (Carp 2001). If next year’s conference takes the performativity of religion as its theme, I wonder, is there not an opportunity here to explore a more animate, embodied expression of academic life?