Everyone you know is okay

by Theo Wildcroft on 14th November 2015 in Blog 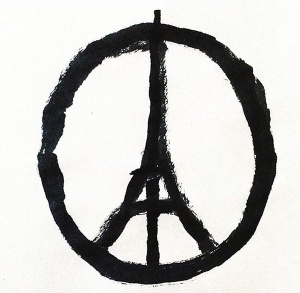 After a fun night out with friends, into social media drops the news that Paris is bleeding. Normality flees. I can’t quite explain why my stomach lurches to hear the Bataclan is full of hostages. Maybe because we’ve just got in from a little local gig ourselves. Maybe because the last time I was in Paris, Phil came back from a Scissor Sisters gig there, laughing about the lack of air conditioning and how little the band were wearing on stage. I am a good global media citizen: I pass the message on. Thus I find myself watching half a dozen news sources and keeping an eye on Twitter; sharing updates as we find them with my French ex in Sweden; calling out the headlines to my husband. Someone tweets from the Bataclan itself “Ils abattent tout le monde. Un par un” and I cannot even repeat the words. It’s too close to home and leaves me sick and shaking. I decide I can’t watch the coverage in French. Facebook’s Safety Check marks each one of my ex’s friends safe. Someone pops up in mine I’d forgotten about, and my breath catches in thanks.

Everyone you know is okay. Phil is less affected. He recalls travelling into Manchester on the day of the Arndale Centre IRA attack. Watching the smoke rise. Wondering who was safe. This is what we do, then: the shock, and then the frantic checking in with friends; loved ones. The relief of finding out people are okay. The condemnations and neat theories of how the world should respond. Worse: the armchair strategists telling people how they would foil such an attack. Later comes the reality of lives forever changed and communities forever marked. Decades of Algerian terrorist attacks in France made bag checks and metal detectors in large stores an irritating, permanent part of life. You’ll still find few rubbish bins in the centre of Manchester, or on the London Underground: anywhere to easily hide a bomb. My parents’ generation remembers where they were the moment the radio broadcast the assassinations: Martin Luther King; Kennedy; Lennon. Ours will remember where they were each time our phones beeped with notifications of terror.

When the planes hit the World Trade Centre, I was with friends at a London anti-arms fair protest. There was, from a few, an aborted cheer at the thought of the heart of corrupt global capital struck down: a single, uncomfortable, half-second failure of empathy until the reality of the human lives lost slammed home. The police scattered to more urgent work, and we wandered, numb, confused, to the nearest screen we could find. The irony of peacefully protesting the global arms trade, surrounded by anti-terrorist police units, at that defining moment of history, took a little longer to emerge. We started to talk about moving out of a city that no longer felt safe. Later, when I heard about the London July bombings I was 70 miles away. I rang my ex, who was unhurt and in shock, not far from one of the explosions. I rang my father, in case he had a meeting in the city that day. It was he who reminded me that my brother lived in London too, telling me he was okay. Strange, the people who come to mind even hours later, setting the heart pounding again.

Everyone you know is okay. If you repeat it like a mantra, the violence and grief recedes enough to engage in comfortable armchair politics. The world comes together: flying flags at half-mast; lighting virtual candles and sending sympathy to a nation in mourning. Friends say: it’s different because it’s Paris. It’s different because it’s somewhere nice; somewhere we know; somewhere close. Friends say: we stand with Paris, or pray for Paris, or ‘they’ will not win. I don’t understand what they are saying. I’m still in shock and can’t move past it. My ex still grieves for the Charlie Hebdo attack nearly a year ago.

Other friends point out that Aleppo, in Syria, is a World Heritage site. Other friends knew people caught up in the Mumbai attacks on which yesterday’s violence was patterned. The truth is, in news and social media alike we make self-referential decisions about what violence is important enough to cover and share. We are the media, these days: the eye witness accounts, the reporters, camera operators and commentators.

When they began, the attacks in Syria, Mumbai and Lebanon were no less horrific than Paris; no less unexpected. No one can be used to this: terrorism targets the unexpected. And I have lived in Southern France, with North Africa just over the horizon. Every major city has no-go areas where the children of immigrants grow up with no realistic future; powder kegs of discontent and generational disaffection. North African terrorist organisations of various flavours have operated in and out of France since the 1960s. Racism directed at Arabic ethnicities is long-standing, vicious and complex. I had a girlfriend for a little while who was an Algerian political refugee and torture survivor. I was too young. I didn’t know how to even hear her. I remember how many friends she had in Paris. I don’t know if she’s okay today because I can no longer remember her last name.

Everyone you know is okay. The idea that Europe is civilised and safe, while Middle Eastern countries are war-torn hell-holes is precisely why Europeans are suspicious that Syrian refugees have nice clothes and mobile phones. Surely real refugees should be dirt-poor farmers, not middle class professors and doctors fleeing the total destruction of their previously safe homes? Other friends returned this summer from yoga retreats in Greece, desperate to tell the world about the tide of humanity washing up on the beaches. Others speak with horror of watching the mud closing in on the Calais refugee ‘jungle’ as winter approaches.

I struggle to say why it is different now, from that long-passed day in Manchester. Phil thinks it’s because I was a child then. Maybe. Perhaps it’s this networked world too – by the time I knew about the bombs ten miles away, my family already knew they were safe. Mostly I think the differences we see now are about the scale, frequency and callousness of attacks. 7,000 refugees wash up each day on Greek shores. There are more than 4 million displaced Syrian citizens that the UN considers ‘persons of concern’ – people in danger. The 2008 Mumbai attacks included twelve shootings and bombings, over four long days. Almost as many were killed in the Lebanon attacks two days ago. Now last night young men threw grenades into a Paris rock concert and walked into restaurants, executing people one by one. We still don’t know how many are dead.

Everyone you know is okay. I hope so. Maybe if we repeat it like a mantra, it will be true. But still we are not safe. An international humanitarian crisis links the victims of Mumbai, Lebanon, Syria and Paris and touches us all. The numbers of lives ended; of communities changed forever, is incomprehensible. Failing to see the links between them is politically stupid and ethically troubling. Violence is a virus; and grief and anger are the vectors of contamination. And yet, there is a duty, I think, not to rationalise or otherwise explain away what we see; not to escape into platitudes and jingoism; not to look away. There is a duty, for all of us, if we choose to accept it: to sit with the unflinching, complicated, messy, and dangerous truth of global violence. A duty not to judge survivors and victims alike as less worthy of our attention because they have brown skin, or are Muslims, or live somewhere we haven’t been to on holiday. This is our world and, increasingly, we shape our media, both traditional and digital, with what we share, comment on, and respond to. We have a duty to help, hold and hear the wounded of Paris, the grieving survivors of Lebanon, the haunted refugees walking across Europe, and even the troubled young men driven to these psychopathic acts.

We have a duty to face the violence, and hold grief and anger to our hearts and say:

I feel the pain, and it stops with me.

This violence, it stops with me.

Until everyone you know is okay, it stops with me.