Spinning dreams – and a contest!

by Theo Wildcroft on 26th November 2015 in Blog 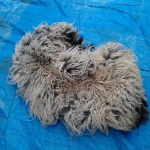 The world these days can have sharp edges, and cold winds, so in honour of all our spinning ancestors, I’m holding a competition. Join my mailing list (see bottom of page) to get in on the chance to win something tiny, filled with love and magic and history; in Angora and Merino and Shetland; in soft browns and white. It’s just a bit of fluff and fun to start the season with a smile, from me, to all of you. But read on to know why it matters. 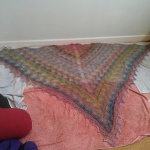 Hair is a funny thing. Theoretically it’s just dead fluff to keep you warm, how we dress it and cut it is culturally important: from women’s hair taboos, to mourning rites. Almost anything that can be done with Black hair is politically significant. Yet what we mostly forget is that hair is the source of one of humanity’s earliest, most enduring technologies. Whilst furs and leather are heavy, unwieldy, and difficult to work, spinning, knitting and weaving are truly magical crafts that can take short fibres and turn them into warm, fitted clothing; allowing humanity to thrive in almost any climate. 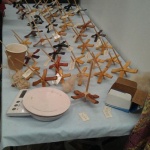 To this day, most of the fabrics around you are still made in the same way. Comb. Draw. Spin. Ply. A process that begins with clever fingers and a weighted stick is now replicated by machines. But what revolutionised fabric production was rarely the method, only the scale. Comb. Draw. Spin. Ply. You can do this with plant fibres, and many cultures have, but it’s tricky, slippery stuff to work with. The most effective fibre to use is animal hair, because it grows with tiny, tiny scales along its length. These scales lock together at the slightest opportunity, and so hair felts, or tangles together. From back-combed beehives, to hair oils to braiding and locks, to ancient enamelled combs, encouraging or preventing hair from felting is at the heart of hair care. 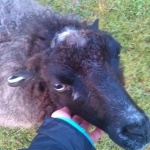 Felting is easy, but the really ingenious act is spinning. Fibres are combed so that they all lie in the same direction. At this point mixed fibres are blended together. A handful of wool with a finger-full of silk for shine, perhaps. The heart of the skill is in drawing these fibres out, whilst simultaneously spinning them together. The scales on the hairs lock, and a handful of fibres no longer than your thumb transform into a never-ending thread. 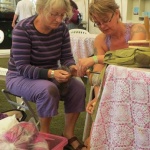 If you draw too many fibres, or they are already tangling, the thread will be thick, coarse and lumpy. If you spin too slowly, they won’t lock and hold together, and the thread will break. Spin too fast, and the thread will corkscrew together. In fact, it’s very difficult to get enough spin for a stable yarn without over-spinning. So thread and yarn is usually plied. In plying, you spin the spun threads back together in the opposite direction. 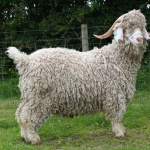 With just the right amount of counter-spin, it forms a double-helix that is much, much stronger, and the resulting thread or yarn hangs still, and doesn’t corkscrew back on itself. You can ply as many fibres as you like together; you can ply thick with thin, but it doesn’t change the technology. Comb. Draw. Spin. Ply. Double-helix. Centuries and more before artificial, high-tech fibres, this technology was used to make enduring fabrics that were waterproof, antibacterial, warm, soft and strong. 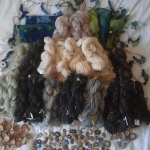 In warmer climates, cotton, silk or flax are spun: strong and light. In Britain and Ireland, we have traditionally favoured sheep’s wool: warm, even waterproof, and amazingly easy to spin. The natural lanolin on the fibres make the spinning even easier, and some still prefer to spin ‘in the grease’. And if you want a fabric that is more waterproof, and anti-microbial, you keep the grease, and the smell, in. 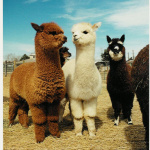 Children living among alpaca herds are taught to spin as soon as they can walk. Ancient crofting culture endures in the Scottish Hebrides entirely through tweed production. In medieval Europe, a woman still learning her craft – not ready to marry – was known as a spinster. Later, acres of linen was spun on drop spindles to put sails on ships that set out to enslave races and establish empires built on the production of cotton. 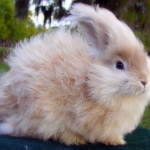 In the usefully damp climate in the North West of England, the resulting Industrial Revolution poured the children of cottage spinners and weavers into cotton mills, and for my ancestors, a whole way of life ended forever. Gandhi instructed his compatriots to learn to spin in order to destabilise the British Empire’s hold on India. Today ‘fast fashion’ is a keystone of global inequality, and when we think of barely-legal sweatshops, we think of fabric.

Our world is spun together. It is woven into our languages, and the stories we tell. Grandmother Anansie spins the universe. The three Fates spin, measure and cut each person’s life as a thread. Rumplestiltskin spins straw into gold. Sleeping Beauty pricks her finger on a magical spindle. For centuries, spinning was women’s work, done in the home. Although a spinning wheel is many times faster than a drop spindle, you have to sit and use both hands and feet. And so drop spindles endured because, as I know, they can be used anywhere. 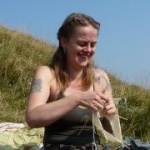 Like bread baking, and fire building, spinning takes us so deep into the heart of human culture that it is part of who we are and how we have created ourselves as a species. My fingers have strong memories. They caught the feel of draw and spin almost immediately. I spin to sing to my ancestors: generations of women spinning warmth and safety around their loved ones. I spin to remember that the world is still mainly changed with human labour: to connect with those spinning and sewing in hope of a better life. I spin to ground myself in a rhythm of movement and breath, tension and release: spinning is one of the best meditations I know. 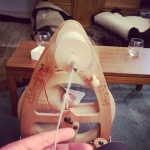 I spin on a drop spindle if I’m at bhakti events and festivals and meetings; on a wheel at home. Sometimes I get too busy, and tuck my spinning away for months, but it always calls me back. People ask me: what are you making? They expect me to say: ‘socks’ or ‘a shawl for a friend’. I want to reply: ‘I’m spinning blues and greens and natural brown; from feisty Shetland and softest Angora, into silky sleek dreams’. The process is the heart of it, and the product unforeseeable. When someone spins, and weaves or knits for you, it is a rare, deep form of magic these days. Hours of dreaming and thinking and love and hard work shine out of every square inch, when you know what to look for. 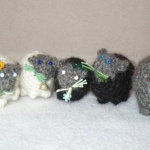 From me to you, then. Something tiny, filled with love and magic and history; in ethically sourced Angora and Merino and Shetland; in soft browns and white. If you win, you’ll have something that holds all that like a secret spell, hidden in plain sight. A little spell of spun dreams to take into the depth of Winter’s night.

← Conflict and violence culture
For the love of a planet →