The morning after my heart broke

by Theo Wildcroft on 4th August 2016 in Blog 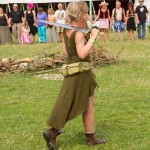 Right now, where I’m expected to be is coming out of my morning sauna and striding across the field to where a couple of dozen people are waiting to greet the day through my yoga session. I’d tell them of my love for this land and the tribe that builds this sacred space every summer – family, one and all. I’d do this whilst helping them connect to body, land and community – heart to heart, hand to hand. I’d try to share hope with them, different ways of being, of loving, of living, on this our broken land of Kurukshetra. I’d spend the rest of the day helping to deal with a thousand different crises large and small, whilst helping with rituals and workshops and helping hold this tribe together, from its core veteran heart to the newest, wide-eyed arrival. I’d do this all, with a swagger and a smile that speaks of ease and joy, no matter what it was costing me, because I have seen it change people’s lives, again and again. I have built relationships so deep, I cannot begin to tell you what they mean to me.

But yesterday, I reached a boundary I couldn’t cross. For a decade now, I’ve spent months of every year preparing for this week, and today, I am not there.

You see, these spaces, these events, are home and family for some; and a week’s holiday for others. They are tribal spaces and commercial spaces at one and the same time. When prices are put up to cover costs, we bow our heads and suffer accusations of being mercenary, even though the camp has never made a profit, nor aimed to. When workshop leaders and crew suffer personal traumas, we scramble to replace them even as we comfort them and find ways for them to be safe. We give our winters to planning and our early summer weekends to raising marquees, plumbing, patching and fixing, and writing risk assessments in the local injuries unit after sledgehammer accidents. And sometimes, just sometimes, we reach a point where personal and commercial needs diverge so fully that hearts break, and even so, the camp goes on. After an hour of deep grieving and holding each other as if we could never let go, someone has to leave, and someone else has to walk into a circle of a hundred people and open the camp – all the time hoping that I’ll be right behind, with a swagger and a sword.

For well over a year now, I’ve been coping with some rather nasty, mostly online bullying, by the kind of person who will tell anyone who’ll listen that she’s the real victim. People believe her, because she believes it, and because she’s so obviously broken, and I’m so apparently not. I spent a couple of years myself as her friend, comforting her each time someone was reportedly terribly, awfully mean to her. Again. The list of unfortunate occurrences grew ever longer until I refused her myself. I couldn’t professionally endorse a terrible, dangerous book. I was accused of tearing a person’s lifework to shreds – a thing she was sworn to defend. When I refused to apologise, I was added to the top of the list of terrible people out to abuse her.

Since then, she has repeatedly accused me of subtle and unprovable social crimes. At the same time, she’s been trying to oust me from the heart of my tribe. The more I kept my silence and moved away from spaces where she was trying to cause conflict, the more space she took up. I’ve had endless advice on what I could do to stop it, none of which worked, because nobody else is willing to call her out on the reality of what she’s doing.

She’s very good at it. She wriggles her way into media roles, and then cuts me out of what should be official communications. She slips into meetings she has no reason to attend in order to be ‘helpful’, and acts injured and hurt when challenged. And when I finally broke, and said I didn’t feel safe with her onsite, she surrounded herself with a group of fans, told them she didn’t feel safe either and maybe she should go. Of course they rallied to her side, and a man who loves me dearly, a man who I love more than I can say, felt it would be unprofessional to insist that she leave.

I don’t know how deeply this has wounded the tribe. The most capable, strong and generous hearted people left on that field are carrying on this morning, but I know their hearts are as broken as mine. I don’t have the answers, but I am determined to find them. We have to find ways to hold our spaces safe – not just for the casual attendee, who has no idea what we risk and sacrifice to nourish the hearts, bodies and souls of hundreds in a field where we have to build everything from scratch. We have to find ways to hold the boundaries of our tribes safe for those of us who give actual blood, sweat and tears each and every year to make it happen. I’ve seen too many good people burn out; and too many needy people suck them dry. I have had too many people nod knowingly when I speak about it; too many people guess the name of the bully.

So I watched the man who has built and sustained this camp for a good portion of his life, sob and tell me he hates what it takes from him – but he has one tipi down, the showers are leaking, and he has a ritual to perform. I knew my partner and I were probably the two people on site that could help most, and I also knew we had to leave. We three held each other for as long as we could first.

Because the morning after my heart broke, I went for a run.

This is what most people don’t get about trauma survivors. We’re not victims. We can’t afford to be broken. My heart aches for those of us that folded under the pressure. Those that aren’t dead make up a large proportion of our culture’s severely mentally ill; of our homeless and prison populations; our chronic alcoholics, schizophrenics and anorexics, and, sadly, our abusers. Among those are people we still hold in our tribes – our chosen families, and try to keep us all safe whilst healing. But the path of broken victim isn’t one I have travelled along, and the path I did walk began so early, I have no idea how or even if I chose it.

The day my parents finally separated, I watched the walls of my bedroom melt, but I still got up the next morning and made sure my little brother had breakfast.

The night I was first raped by a family member, age ten, I truly thought I would die of shame, but I still got up the next morning and helped my family pretend nothing was wrong.

By age thirteen I was having panic attacks any time I was surrounded by white noise. To cope, I learned a route so I could vacuum the whole house without my back leaving the comfort of a wall.

By sixteen I knew that only a good education could get me out of the house without being even more vulnerable, so I worked so hard on my A Levels that I got into one of the finest universities in the country.

The stress nearly killed me. Within the year, I was having regular dissociative, catatonic episodes that I knew could get me sectioned, so put myself in therapy and kept going to all my classes.

I left home, therapy and my support network to teach abroad, stopped eating or sleeping and one night the only thing I could focus on was a bottle of pills. I rang home, packed myself up, and walked onto a plane weighing less than I care to admit. My references from the school were excellent.

Since then I have learned to nurture and look after myself. I have avoided every official diagnosis, even though my test scores are off the charts for PTSD and complex trauma; for disordered eating and dissociative identity disorder. I have coping strategies, rituals and check in processes that may seem trivial, but allow me to live a deeply fulfilling, joyful life. Taking them away would be life-threatening.

I am far from broken. But when I am at my most capable is also when I am riding the edge of what I can do – using the skills of survival to get through another long day; another camp; another chapter of my thesis. Each one has a cost, and a risk, and my dearest loved ones will be watching me closely. Sometimes, just sometimes, they tell me when I’m too close to the edge for safety, and I try to listen.

The morning after I listened and my heart broke, I went for a run.

I ran through driving rain and further than was safe, only half in my body, trusting my feet to turn for home before I injured myself. If I’m lucky, it’s given me the drive to get through a day of work and food and a little laughter. In the morning I might need to run again. At some point, I hope to be well enough to get back on the yoga mat and feel my body’s pain. I can’t afford to stop eating, to crawl into bed for a week, to be broken, because it might be a long road back.

So the morning after my heart broke, I went for a run.

← Wild Ones
A Harvest of Fieldwork →