I am at home at the moment, taking a couple of days to catch up with myself about halfway through my Summer and early Autumn traveling plans. As many people will know by now, the majority of my research centres on the summer circuit of British alternative yoga events and camps. And as scholars will realise, this overlaps with the academic summer school and conference seasons. This means that after two weekends away in two weeks, I will return to the Santosa Yoga Camp Wednesday night, returning on Sunday, only to travel up to the BASR conference in Chester a week later, and the EASR conference in Belgium two weeks after that. Although I know I am blessed and privileged to have these opportunities, getting back to my thesis and my regular routine will be a bit of a relief. And conferences means papers to present, and I have to write those and keep up with all my other deadlines and my yoga teaching too.

It feels like an age since Colourfest at the start of June, let alone the first event of the year – the Beltane Bhakti Gathering at the start of May. And in the middle of July I set out on a two week trip to three events in three countries, traveling for much of the way alongside Jason Birch and Jacqueline Hargreaves of the Hatha Yoga Project and The Luminescent, who are moving from research sites to conferences to writing retreats for a whole year. I’m not sure how they manage it! Anyway, although much of the life of an early-career academic consists of being holed up with a pile of books, an endless EndNote library of articles to read, and a laptop to attempt to write on, a surprising amount of time is spent as follows. Please bear this in mind when you hear people talking about scholars who live in ivory towers rather than the ‘real world’! 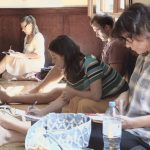 When I pitched the concepts I wanted to teach on the inaugural Jagellonian Yoga Studies Summer School, I really didn’t mind how much I was paid, because the experience of developing and delivering my own material in this forum was just too valuable. So the fact that I didn’t have to arrange for my own flights or accommodation was an unexpected bonus. I arrived in Krakow on a Sunday night, grabbed a little street food and slept. At 7 am the next morning, and for five days more, I would be up and out with an apple in my hand, walking to the nearby university to teach the 8am session on ‘Re-Thinking the Yoga Body’. I led sessions that combined experiential movement, theory and historical context to explore: 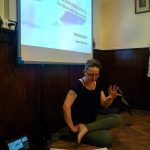 The forty or so students were a real mixture of graduate students and yoga teachers, with the occasional academic for good measure, and debate and discussion were lively. Each day, I stuck around for the rest of the morning, and even led one or two lunchtime practices. It was a delight to see even a fraction of Gudrun Buhnemann’s collection and analysis of yoga-related iconography images. Jason Birch laid out a timeline of the pre-modern development of hatha yoga day by day. And on Friday, his partner Jacqueline treated us to an experiential exploration of a rare 17th C asana text. I highly recommend keeping an eye out for the film and critical edition of this text in the coming months, and if you ever get the chance to explore pre-modern asana with Jacqueline, jump at it.

I had meals with various students and fellow teachers, bonding over pierogi and the impressive variety of budget vegetarian offerings in the city, but mostly spent my afternoons preparing for the next day, keeping up with my reading, and sleeping, so sadly I didn’t get to see much more of Krakow than on my previous visit. I did make a lot of new friends and contacts. The world of Yoga Studies is small and scattered, so we make the most of it when we do come together, as students, researchers and teachers. 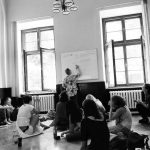 On Saturday morning after my last class, with a week of the summer school yet to go, it was time to catch Jacqueline and Jason and fly off to the next leg: the conference on ‘Medicine and Yoga in South and Inner Asia’ at the University of Vienna. The conference is a little tangential to my research, and I wasn’t presenting, but it was an invaluable opportunity to be inspired by the most up to date research by others in the field, and of course, another chance to chat with colleagues that I don’t get to see often enough.

I’ve heard horror stories of academic conferences so large you can barely find your way around, conferences where people jostle for connections and networking opportunities and everyone’s booked for every meal months in advance, as well as conferences where post-grads are subjected to put downs like a sport, and have their best ideas stolen. I’m obviously going to the wrong events, because I have loved every conference I’ve been to, despite ending up wired and high on sugar and ideas by about the second morning. This was no exception, but before that I had time for a day off in beautiful Vienna.

Phil took me on a tour of the city highlights, sending me route instructions by Whatsapp and getting photos and videos in return. After a leisurely coffee with Jason, Jacqueline, and conference host Dagmar Wujastyk and her husband Dominic in the morning, I set off from my cosy AirBnB flat on one of the hottest afternoons of the year. A tram around the ring road past some of Vienna’s most impressive buildings took me to the Belvederes, but I only really had time for the permanent collections up on the hill. In air conditioned happiness, I took in stunning medieval art, beautiful 17/18th Century landscapes, saints ascending into heaven, ethereal and glowing Klimt portraits, including of course, that Kiss. I bought tiny presents for Phil, and detoured into the delightfully strange ‘Fat House’ installed in the gardens. From there Phil walked me to the fountain-splashed monument to Heroes of the Red Army, to Karlsplatz where I stroked the Henry Moore and drank iced green tea, then on to Secession, where I mostly giggled at Alex da Corte’s light graffiti. 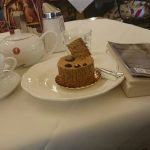 More walking to the Majolikahaus and up through the museum quarter to the Burggarten watched over by a statue of Mozart. Then around the Albertina museum and into the old town, through the Josefplatz and the Michaelaplatz, passed by a Segway overtaking a horse-drawn carriage, and then a stop at Café Central for proper Viennese cake and more green tea and a quiet read. By the time I got back to base, I just about had the energy left to grab a falafel on the street, and spent the next day working and hiding from the sun.

On Tuesday, the first day of the conference, the temperatures climbed even further, but we were undeterred, and with closed shutters and fans, settled in to the many presentations on offer. There’s more detail in my latest Research Round Up, but in essence Dagmar Wujastky, Stephan Kloos, Barbara Gerke and Katharina Sabernig, the rest of the Ayuryog team, their colleagues from the University’s Department of South Asian, Tibet and Buddhist Studies, the Austrian Academy of Sciences, the Ratimed Project, and Padma hosted an excellent three day conference. Given the number of collaborating institutions, the wide diversity of papers from multiple disciplines was unsurprising. There were textual, historical and iconographic studies. There were papers about transnational assimilations and reworkings of Yoga, Ayurveda, and rasayana, as well as Tibetan and Mongolian medicine. More anthroplogical and historical studies considered connections and flows of knowledge, myths, stories and subaltern knowledges, as traditions evolve and meet contemporary realities. 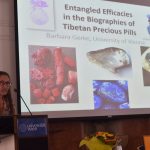 As I wasn’t presenting, I could just absorb and be inspired, particularly by precious pills, Sanskrit medical riddles and the trade in mercury. Jason, Dagmar and Gudrun all presented, and Jacqueline filmed most of the conference. Films of some of the papers can also be found on The Luminescent website and the AyurYog YouTube channel. 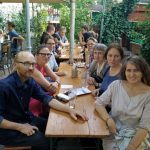 As well as the conference business, we mostly talked and talked, sharing research and bonding over meals and a trip to rather wonderful Josephinum Medical Museum (not for the squeamish). On the last day, there were even ice lollies, and birthday cake for Philippe Maas, to reward us for our stoicism in the heat. It’s strange to go to Vienna and finally have the time to hang out with colleagues such as Suzanne Newcombe, who is in the same department at the Open University. The whole group were genuine and friendly, and never left me, as a baby academic, feeling like I had less to contribute. I made new friends, and came away with many new ideas, and it was all over far too soon. Some of the group were off to the next conference even as I had to fly home via a very delayed EasyJet flight to Gatwick, reaching home at past 4 am. 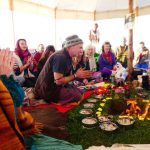 By Friday lunchtime the next day, Phil and I were in the Forest of Dean for the last few days of Sundara Yoga Camp, and a lot more catching up and bonding with my research community and post-lineage yoga teaching gang. From intense heat, to wind, rain and flashes of sunshine, and from conferences and hotel beds to practice and canvas. I enjoyed a little Yin Yoga with Amanda Hamilton, and kirtan with Louise Thorndycroft and Tim Chalice. Saturday I paid my keep by leading a yoga nidra session, and a discussion on contemporary yoga politics and issues. The evening kirtan with Jay Krishna, Tabla Tom, Trisha and friends lasted well beyond its time, and included much dancing and whooping. After far too little sleep, Jay led the havan on Sunday at 6am, after which was a yoga session collaboratively taught by various teachers, and then Phil and I helped a little with pack down before wending home. By 9 am the next morning, we would be on our way to emergency eye treatment for Phil, but that’s a whole other story.