by Theo Wildcroft on 5th December 2017 in Blog 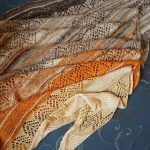 Some people love to make things.

I don’t. I enjoy it, yes. But creativity is like breathing for me. It drips from my fingers and fills me with daydreams. It stops me getting to bed at a reasonable time. It makes my hands itch. I get grumpier without it than without my yoga practice.

Every Yule for as long as I can remember has brought a new project – some small new skill in a box like chibitronics or candle-making or just a new set of materials. But like most creatives I have preferred crafts. I spin, knit, crochet, and all the other arts commonly known as fibrecraft. I write, obviously. Occasionally I bake, but not enough to be really good at it. And I’ve a soft spot for covering large surfaces with geometric designs in marker because I like the fact that you don’t get a second chance. 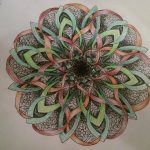 When I started on the PhD, my creativity changed. I was back in a world of words and thousands of them poured from me in blog posts and articles and thesis chapters that got away from me. I’ve always known how to write to entertain. In three years, I’ve also learned to edit and I’ve learned to be circumspect. My supervisors warn me not to over-share. Academic thieves exist and they prize inspiration above all. Sensitive topics attract vicious trolls.

When I’m writing my whole body is engaged, but when I’m reading, and when I’m editing, it helps if I craft at the same time. And maybe this is where I differ from most people.

I get to the end of a week’s research and in my hands are a new pair of gloves I’ve barely glanced at, or a skein of yarn like a long exhale. 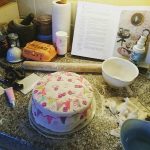 Occasionally well-meaning people will suggest that this creativity could be monetised. But our culture has lost the widespread ability to appreciate craft: the hours it takes, the skill it demands. I have a meditation shawl like nothing else you’ve ever seen or felt. It took two years to make, turns to gold across its length, holds fibres from a dozen different sources and it’s mostly handspun on a drop spindle. What price would you pay for that?

Besides, every craftsperson will tell you that the first time you make something is the most magical. Ask any knitter how much more boring it is to knit the second sock. I rarely get through a knitting pattern the first time without improvising adjustments to it. The best pieces crafted – the ones that shine – are always singular, always original, and always proofs of concept, unrepeatable ideas come to life. 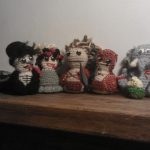 So like most fibrecrafters, I gift what I make for people I know will appreciate the love song in every stitch.

What you get from me will be unique. And like most fibrecrafters I’m a member of Ravelry: a walled garden online community within whose boundaries is a world of generosity, of joy, of dedication to these ancient crafts. There are thousands of patterns for free there, and some for sale, and shockingly, in this age of free content, people pay for them.

Because while social media has been an absolute gift for the sharing of and participation in creativity, it has a few nasty side effects. So we pay for our platforms: for our phones and our data downloads. But we resent paying the people who actually create the content. So we allow platforms like Facebook to own all the content we share on it and change the rules at a moment’s notice. On Facebook, we’re not even the consumers, we’re the creative data.

We’re a monetisable database made up of millions of unique iterations of online lives as unrepeatable proofs of concept. 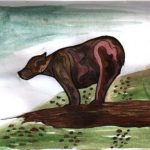 Witness: two years ago a well-known yoga teacher called Diane Bruni started a Facebook group to share the fast evolving scientific, historical and practitioner research related to yoga and movement studies. Within a year it had ten thousand members and the admin and moderation load – all undertaken unpaid, of course – was huge. It grew to twice that, but Diane had never led anything like this before and she learnt as she went. As is ever the case now, a handful of people seemed to be causing the most complaints and contributing the least worth. She chose to ban them from posting sarcastic gifs. Everyone who understands social media can guess what happened next.

But can we hold just a moment’s silence here for the fact that yoga teaching trolls even exist? And can we cut any slack for a woman with impeccable ethics and a lifetime of experience getting something wrong while holding space for twenty thousand people to share knowledge? Can we recognise the Yoga and Movement Research Community as a work in progress and an ephemeral proof of concept? Something unique, and precious, and brimming with creativity? 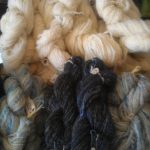 Because on 15th November, after two years, the YMRC suddenly disappeared. Two years of content, of discussion, held for twenty thousand people was gone without notice or a trace. This is a minor tragedy, but sadly inevitable on the platform. These things just happen with Facebook. What also happened, however, was rather closer to home for yoga social media culture.

Within five hours, the afore-mentioned group of trolls had set up two copycat groups as a prank, using photos of Diane teaching, and a child sticking its tongue out. Within two days, there were a handful more, all by the same people. People who call themselves yoga teachers were posting to threads discussing the problem elsewhere, goading and gloating, using comments like ‘Karma’s a beautiful thing’. I was told by one woman that ‘there’s nothing more yogic than laughter’. I have three different versions of the ‘Gita and four of the ‘Sutras on my shelves. I guess I missed that particular iteration of South Asian ethics. 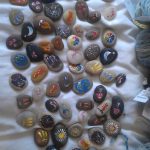 When complaints and support requests were made, Facebook were, as usual, silent.

There were two possibilities: either this was a technical glitch, or an algorithm triggered by complaints about the group.

If it was the latter, two suspects were clear: either the afore-mentioned trolls, or a known group of guru fanatics who are known to use takedown procedures relating to copyright and indecency to stop the sharing of evidence of their guru’s sexual impropriety.

Personally, my money is not on the trolls, because in the two years I’ve been watching them, I’ve rarely seen an innovative, creative act – even of cruelty – emerge from the crap they repeat. There are endless acts of small meanness, and paranoia. When they were banned from the YMRC crying ‘free speech’, they set up a new group, to which I and many others were added without asking, and then removed 36 hours later. Someone had shared content, Diane had found out, and so anyone who might be a suppressive person was removed. Lesson one of paranoid totalitarianism is take the academics and the creatives out first, right? 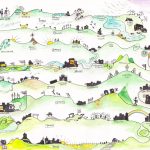 diary of a long distance walk

The funny thing is, I know academics in the group of trolls. I’m curious how they square their involvement in yoga social media on their research ethics forms. I don’t wrestle with that issue because the yoga communities I research aren’t very active in these kinds of group spaces precisely because they don’t trust the platform, or the technology, and they don’t understand the meanness.

There’s a whole world of radical contemporary yoga hidden in private groups and personal messages and close-knit friendship groups and the occasional advert for events.

Mostly they use social media only as a way to stay in touch with people they have looked in the eyes and shared prasad with. Some of them are quiet members of groups like YMRC because the content is worth it, but will they bother following Diane to a new group, given the drama? I hope so. Yoga social media allows me to form bonds and stay in touch with creative yoga teachers, writers and thinkers all over the world. It puts my work in context. I’d hate it to become a space where the most honestly creative are hounded, mocked and parodied. 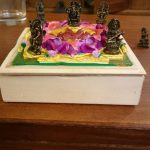 We need a new ethics for social media. We all know this.

If trolling can thrive in something like yoga, online culture is in a sorry state. Maybe we should ask the knitters. Because what we need above all is a new version of social and cultural capital that isn’t based on what you can share, how many people you can irritate, or on your sophisticated ability to weaponise both nihilistic cruelty to others and over-sensitivity to criticism of your own motives. I’m so sick of the endless repetitive noise of ‘you can’t take a joke’ and ‘how dare you suggest I’m being mean’. We call them trolls, but trolls are slow and stupid. These people are lightning-fast scavengers: hounding the over-worked creative types until they make a mistake and then calling their friends to feast on the remains. I don’t doubt within hours they will have made memes parodying this post because they feed and multiply on the sincerity and creativity of others.

In pockets it exists, but how do we embed these new values in moderating the really fast-moving, large groups when no-one’s getting paid for hours of admin, and everything can be taken away in a moment? I’m not sure. I do know that since I started my PhD nearly a thousand yoga teachers have added me on Facebook without so much as a hello, because that’s what you do when you want to hear and to benefit from creative people online. I do it too.

But I also know that some of those people that added me are trolls, and I don’t think I want to offer these hard-crafted words, these proofs of concept, to people who can’t respect the time and skill that goes into them.

You can disagree with me – plenty do, but don’t take the fucking piss. 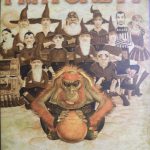 Maybe it’s all the talk of fantasy creatures, but I’m reminded somehow right now of Terry Pratchett – a man so creative that he died with a hard drive of ideas for books to write. A man who quietly supported the careers of other creative people who came into his orbit. I’m reminded of Mr Nutt: the fearsome orc raised in civilised ways, looking up with wide eyes and asking ‘Have I achieved worth?’ It’s a moment calculated to bring tears to the eyes of a reader, knowing as we do that the character never, ever stops trying to build and create, to better himself by making things useful and beautiful to add to the world. Isn’t that what it’s all about, in the end, this practice of yoga? Have we achieved worth?

The YMRC did return in the end – Facebook reinstated it with no explanation or warning. You can join it here.