by Theo Wildcroft on 9th September 2018 in Blog, Yoga 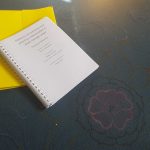 A fortnight before the Autumn Equinox and this is my harvest.

Thesis submitted. Ten days in a field outside Glastonbury. Three days at a conference in Belfast.

Two upcoming deadlines in a month – one for an article, one for a book chapter – and a viva on the horizon in November, plus a dozen online meetings with friends, colleagues and connections to set up. And not to mention doing the admin and the prep and turning up to teach a handful of yoga classes and sessions of yoga for disabilities each week, and one to one online sessions too. And travelling to the Accessible Yoga European conference, and guest-teaching on the Yoga Therapy for Children course, both in October.

Mine, like many ‘early career’ scholars is a life of many parts, in which, as a colleague told me “there is no career, there is only serendipity”.

I actually sat down this weekend and mapped out all the connections, all the promises, all the possible futures ahead. If there is no set route, then it’s up to me, to the things that drive me, and the people I want to work with, and the responsibilities I hold to academic and yogic communities alike. With the hope that some of it, sometimes, will help to pay the mortgage. I do not have an independent income. I don’t even have a pension. So I just have to hope it all comes out okay on average and balance getting paid with working as an act of service.

All this uncertainty and opportunity means I’m not sitting back and waiting for the viva. I’m reaching out, and checking in, hoping to put a few things in the schedule before I settle into a long winter writing, and translating the thesis into something you might want to read. What I want to do is share what I’ve learned, because it’s important, because I think many people will find it useful, but also because I want to test this understanding side by side with sangha after sangha, circle after circle, conference after conference.

Communities, not individuals, are the wellspring of cultural knowledge. Often it takes one person to see clearly enough to draw the water. But the community has to listen to them and support them in the journey.

I can do this because I’m drawing on a Master’s degree in community and learning theory, but also over a decade of teaching yoga in grassroots spaces. The vast majority of that has been in village halls, small festivals, and with vulnerable populations. I can do this because the PhD process for me involved learning a lot from other scholars, most of them historians of yoga and scientists of movement. I can do this because while my research project was focused on largely unsung and unknown communities here in the UK, it caught the attention of a transnational yoga culture. As a result I reach the later stages able to speak to the reality, the history, the research, the international context and the future of yoga. And I’m used to sharing that material with academics and yoga practitioners alike, through innovative teaching methods, and with the support of my own sangha, here and abroad.

What I’m really asking for is your help making it possible, so I can come and visit a few teacher training groups, CPD groups, and anywhere yoga teachers and their friends can gather.

I’m happy running single sessions or weekend workshops, and I’m honing the results of the PhD, to settle on a range of relevant themes, each of which I think we can look at in a morning, afternoon, or evening.

I want to discuss the real history and current state of research into the foundations and formations of modern yoga, and how we relate to ‘expertise’ as we practice.

I want to talk about agency, and consent, and relationality, and how we can truly cultivate ‘the heart as inner teacher’ as we practice both alone, and together.

I want to share the very real sources of hope and change I see in contemporary yoga, at this uncertain time for our sanghas and our communities, and how we can negotiate better relationships through and surrounding the practice.

It’s not anti-lineage, it’s not non-lineage, it’s not anti-tradition. In fact in post-lineage spaces I find people who are devoted to a guru coming together with those who have none, and those who suffered great harm in lineage situations. But the point is they come together, and share and learn from each other, in new and surprising ways.

That’s four sessions at least, which could expand to fill many more, but to touch the surface at least on all of them would take a solid weekend at least. Most importantly, I am not doing this to be a cheerleader for the current rapid evolution in yoga. I’m not even sure what I’m talking about is as new as it seems.

But I’ve spent the past few years refining a new way of looking at the immense diversity of yoga, especially in the modern era, that might be a better way of understanding the effect of both tradition and commerce on the practice. I believe it shines a light on some very interesting untold stories, and illuminates some hopeful paths forward.

In the end, it’s all about agency, and authority, and authenticity: empowering the vulnerable, walking alongside students in their joys and grief rather than telling them what to do, and learning how to be honest and honourable about the histories we each carry within us. It’s about all the ways tradition serves us, and where it can lead us wrong. It’s about the risks and rewards of democratising practice, because teaching doesn’t become miraculously free from abuse when you do so. It’s about recognising that resisting both dogma and commercialisation will continue to be difficult, and about recognising that access and power are always inequitably distributed.

Over the last few years, so many people have told me that they’d love to have me come share this material closer to them. And where I have been able to do that, often at the camps that birthed the whole project, it has been life-affirming for all concerned. I want to do more of this, before I get buried in deadlines again.

You can help. Gather friends, gather students, figure out a venue and a time and get in touch to get it in my diary. Pay me a modest amount for the effort and the travel. And in return you’ll be at the edge of the wave, among those people who got involved before the book was published, before the whole thing gets any bigger. And I won’t forget that. Ever.

← Tira and the bees
Everything here is true… →