by Theo Wildcroft on 26th November 2018 in Blog, Uncategorised, Yoga 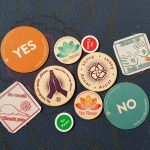 Two and a half years ago now, I brought a new tool to class: my very own assist chips, or consent chips, or flip chips, depending on what you call them. Back then, I’d come across the idea via a number of American and Canadian friends and wanted to check them out, as a way of exploring consent and agency in the touch and assistance I offer my students. But although one or two websites sold them then, including what might even be the originals at https://www.yogaflipchip.com/, hardly anyone had heard of them, and it was really difficult to get them here in Europe.

So I made my own, with materials lying around my house. They’re looking a bit battered now, but my students took to them fast, and together we were able to have some really good conversations about choice and who is actually in charge of your bodily experience in a yoga class. I know not every teacher can have such abstract and philosophical conversations with your average drop in yoga class, but I’m lucky that my classes are rural, which means that they’re small, and regular, and populated with people with a little more time to think, perhaps.

It just shows that not every yoga innovation takes off first in the faster-paced urban yoga studio. And so for most of the last couple of years, I’ve continued to be an early adopter of this low-tech, portable solution, and the blog post I wrote then about using the chips has been linked to a number of times by yoga people in conversations with other yoga people who were reluctant to try them, or couldn’t see the need.

And then some time in the last 6 months, the balance has tipped, and all sorts of people are now not just using, but making consent chips. There are big studios that less than a year ago refused to even consider the idea of consent chips, and are now branding their own. Activists need to work tirelessly until the consensus changes, but when it does, resistance that seems implacable can turn to enthusiastic support in a remarkably short amount of time. Some businesses that actually laughed at the idea two short years ago, are now claiming to be at the cutting edge of this new development.

Of course you don’t have to use consent chips at all. There are other ways to talk about consent to touch in class. And you don’t have to buy or make anything special either. A simple playing card face up, or down, on the mat, will do. But it’s nice to see a whole range of chips out there now, because it suggests to me that there are much more interesting conversations happening in class about the consent for teachers to touch students, rather than the assumption that everyone is there to be adjusted. Such conversations have to be happening, because unless you talk to your students about it properly, they’ll never use assist chips, no matter how pretty they are.

As a yoga teacher, this makes me happy. But as an academic, I’m also fascinated to watch the spread of a whole new kind of yoga tool. I’m also fascinated by the choices people are making in their designs, and comparing one chip with another. Thanks to some generous friends, I’m gathering quite the collection. But I have a favour or two to ask.

I’d love more consent chips for my collection, and to see how they’re evolving with each new design. If you have one or two to spare of a design that I haven’t come across, and you’re willing to send me them, I’d be very grateful. Drop me a line and I’ll give you my address.

And if you know who first came up with the idea, I’d also love to talk to them, so please put me in touch?

In the meantime, here’s my collection so far… 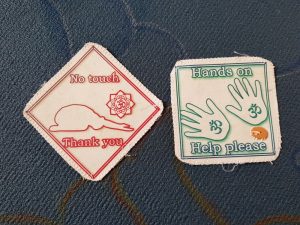 When I made mine, I used what I had. I knocked up a quick design in Photoshop, printed it onto a sheet or two of transfer paper I had left over from some crafting project or other, ironed it onto a bit of calico I had saved, cut them out and sewed up the edges. Almost every other design I’ve seen is round, but square was just easier to cut out.

Recently a whole set arrived out of the blue from the ex-chair of the British Wheel of Yoga, Paul Fox. I don’t know him that well, so it was an unexpected but nice surprise. Paul is a controversial figure in British Yoga, but fittingly for a man who gambled his position on a whole raft of reforms he wanted to make at the Wheel, these chips look and feel a lot like poker chips. They’re small, simple, and weighty. 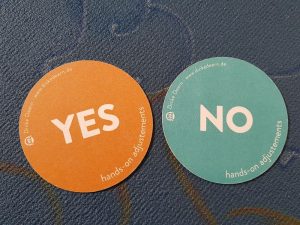 There’s a lot of solidarity and commonality between trauma-sensitive yoga, where consent chips probably originated, and accessible yoga. A focus on empowering student choice and agency is a big part of that. I picked up these chips made by Dicke Deern at the Accessible Yoga Europe conference in Germany, even though they’re printed in English. They’re made of card, light and quite big. I think they’re simple, effective and elegant.

Whilst at the conference, I met with the COO of Yoga Alliance in the US, Shannon Roche. It was a great conversation. Yoga Alliance have been rightly criticised over the years, and the Accessible Yoga organisation, led by Jivana Heyman, were among its most loving and fiercest critics. But the reforms they are putting in place, if they work, I honestly think will make them the among the most supportive, and relevant support organisations for yoga teachers today. After the conference Shannon took time out from her handover with David Lipsius, as she takes over from him as CEO, to send me a full set of Yoga Alliance chips. These are being handed out anywhere Yoga Alliance go at the moment, and are a symbol of the open and honest conversations they want to be having with yoga communities. What I like most about these chips is that they’re designed to be polite and clear what they’re about. This means that even in classes where the teacher isn’t using chips, a student can take their own, and start a positive conversation with the teacher about how they want to be approached in class. 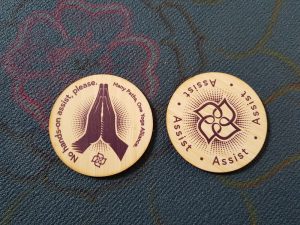 That’s immensely empowering, and so with a little help from my partner, we lightly defaced one of the chips in order to add a lanyard. One of my closest friends is getting it for a birthday present, to take wherever he goes, because my friends can be just as geeky about yoga as I am! And today I’m thinking with gratitude of Shannon too, and hoping that she’s settling in well to this new role. I predict that she’s going to do interesting things with it. 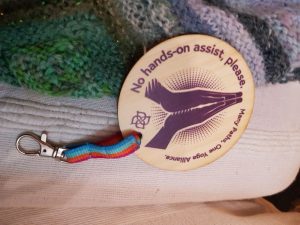 Finally, I do have a favourite set of chips at the moment. If you’re in the UK in particular, consider getting a set of these. For a start, all proceeds go to supporting work with survivors of sexual violence. They’ve also been designed in collaboration with survivors, who picked the orange and blue colours, because they preferred something softer and more neutral than a strong red ‘no’ side and a good-to-go ‘green’ side. My dad is red-green colour-blind, so I’m also aware that orange-blue is a more accessible choice. 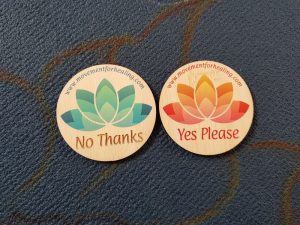 The ‘no’ side is also engraved, and the ‘yes’ side embossed, and a visually-impaired student confirms that it’s easy for her to tell the difference. This saves me from adding puffy stickers to each one, as you can see in my own set, above! Like the Yoga Alliance chips, they’re sustainably made from bamboo, and they’re just really pretty, and remind me of Eunice Laurel, who makes and sells them, and who is one of my favourite yoga people.

My friend and trauma-sensitive specialist yoga teacher, Tiffany Rose, in Canada, will also make you custom consent chips if you ask her nicely! I’ve been thinking about maybe getting some to hand out too, but I haven’t settled on one design yet. Not that I need anymore, as you can tell. But it’s nice to buy them and support those teachers who were quietly figuring out how to make yoga more accessible, and more inclusive, and more trauma-sensitive, years before consent chips became the hot new accessory in class. 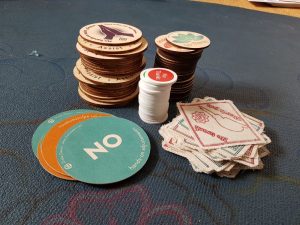