It’s a busy time for yoga scholars and writers at the moment. Next week sees the UK launch of independent scholar Matthew Remski’s new book: Practice and all is coming: abuse, cult dynamics, and healing in yoga and beyond, and last week saw the combination of two significant academic events: the SOAS Yoga Studies Week , and a two-day reading workshop for a future Routledge Handbook of Yoga and Meditation Studies, co-sponsored by SOAS and the Open University.

Sadly, it was a busy working week for me, so I missed much of the Yoga Studies Week, but it kicked off strongly with the Open University’s own Suzanne Newcombe and Karen O’Brien-Kop (SOAS), giving a lecture on new and interesting trends in yoga research. Apparently, my own research was highlighted, so I’m even sadder to have missed it! Other lectures I’d liked to have seen included Finnian Gerety (Brown University, USA), talking about sound and silence in yoga and meditation, Andrea Jain (Indiana University, USA) talking about yoga and neoliberalism, and Gudrun Bühnemann (University of Wisconsin-Madison, USA), whose work on yoga-related visual media is always fascinating. 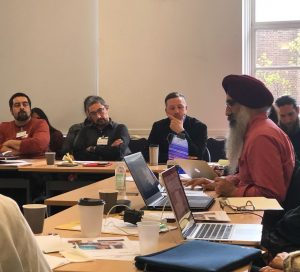 Yoga Studies is a small but growing field, and highly interdisciplinary in nature, including Sanskritists and other philologists, Indologists, health scientists and the full range of arts, humanities, and social sciences found at your average Religious Studies conference! This means that Yoga Studies events are intellectually stimulating, but also a rare chance to hang out with friends one doesn’t see very often. The workshop was entitled Disciplines and Dialogue: The Future of Yoga and  Meditation Studies. The aim of the Handbook’s editors, Suzanne Newcombe and Karen O-Brien-Kop again, was to take each draft chapter and discuss it in turn in live peer review. I haven’t worked on a proposed text like this before, and it was a thoughtful and thought-provoking experience. Each chapter had a reader, separate from any blind peer reviewer already assigned. The reader summarised the chapter so far, with suggestions and comments, the writer responded, and then the group as a whole discussed how the chapter might evolve, and how it might sit within the greater volume. As the workshop title suggested, it was also a chance to have wider discussions about the field and future possibilities.

Again, I missed the first day, and I’m most sorry to miss Shameem Black and Balbinder Singh Bhogal talking about Decolonizing Yoga, as well as Mark Singleton and Borayin Larios talking with Ville Husgavel about their chapter The Scholar-Practitioner of Yoga in the Western Academy. That chapter mentioned a number of other Yoga Studies scholars as examples, including, again, myself. This set the tone for the following day: as this is a small field, many chapters referenced other scholars also in the room, and the overall sense at this early draft stage is of very fluid texts, in conversation with each other, and with multiple layers of peer group input. 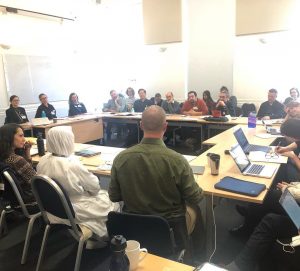 On Friday I arrived in the middle of a discussion on the teaching of South Asian philosophies, based on Mikel Burley’s chapter. This evolved into a wider conversation about disciplinary boundaries, and the politics of naming courses and modules, in which often European philosophies are just labelled as ‘philosophy’, but philosophies from elsewhere are often labelled as ‘religious philosophies’. A discussion on Suzanne Newcombe’s chapter on Yoga and Meditation in the Global North also sparked a lively debate on how to qualify the transnationally dominant form of yoga that originated in Europe and North America: the term ‘white yoga’ was proposed and then challenged by non-Anglophone European scholars and South American scholars alike. The debate was knowingly reflective of the difficulties with defining ethnicity, race, religious and national influences, and accurately reflecting the diversity of localised yoga cultures across the world, and, indeed, the diverse backgrounds of scholars involved in research. The draft chapters of the handbook reflect again and again on that under-researched diversity, and in the case of Adrian Munoz’s chapter on Yoga in Latin America, we collectively recognised significant gaps in available data, and much work to be done by the field as a whole. 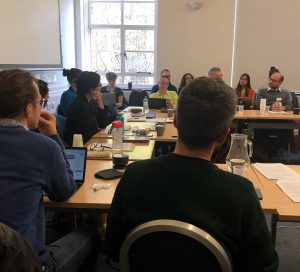 After lunch, Sara Rahmani discussed her chapter focusing on the self-identifications of Vipassana practitioners, and yet more layers were added to the ongoing debate about the many possible definitions of secularism. Matylda Ciolkosz gave a thorough overview of the history of research into the body in yoga: including an elegant separation in practice of movement of (or within) the body and movement by the body. I think Lucy May Constantini, Matylda and myself could have talked all day about methodology, but instead we moved on to Finnian Gerety’s Sound and Yoga, and learned from Samani Pratibha Pragya that Jain metaphysics differentiates between living sound, made by a living being (such as chanting), and dead sound, produced by inanimate objects. In case you’re wondering, sound made by a living being with an inanimate instrument, such as a flute, is mixed sound.

Finally, there was a slightly more tense conversation with the authors of the volume’s only significantly science-based chapter: a review of yoga research that perhaps needs to acknowledge its narrower focus on biological effects resulting to the practice of yoga. Another chapter considering the therapeutic relationship and the wider psychological context for the practice, including recent work by Lindahl et al. (2017) and similar longitudinal studies would be of real benefit. 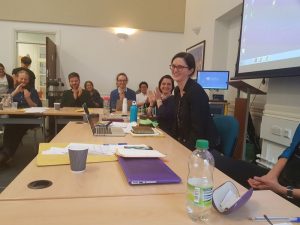 We then put the Handbook away, and turned to a facilitated discussion of possible future funding sources and collaborations. This was Friday 29th, on the abortive ‘Brexit Day’, and so discussion was slightly dominated by the current political uncertainty, and knowledge that so much Yoga Studies research in the last few years would not have been possible without EHRC money. The future of Yoga Studies in the UK is, as a result, uncertain, which given the wealth of ideas, wisdom and vibrancy shown by scholars across the whole week, is frankly absurd.

Nonetheless, even under-funded and hustling for resources, we were energised and inspired by so many good conversations, and so many chances to catch up with friends. So we shared Karen’s birthday cake, took a group photo on the steps, and moved on to a back-to-back public lecture discussing Alchemy in Daoism and Hatha Yoga, from Louis Komjathy and James Mallinson, respectively. This was just the right balance of informative and entertaining to close the week. After that, there were last-minute conversations to be had, and as the hard core set off for dinner together, the rest of us started the late journey home. 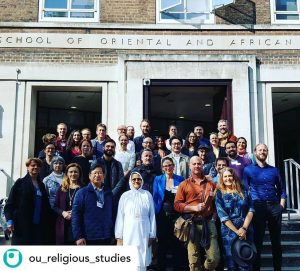 Photos courtesy of myself and Jacqueline Hargreaves of The Luminescent

← Honouring our sources
True consent is justice in action →