by Theo Wildcroft on 29th November 2019 in Blog 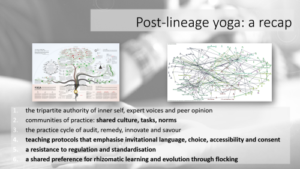 This time last year I was recovering from my viva and starting work on my final thesis corrections. It’s been a very, very busy year since then, and as the year slows to a close, I have just a handful more classes to teach, one more Yoga Nidra Immersion this weekend, and one more talk to give for Karin Carlson’s online training.

It’s been such a busy year, I finally gave away all but one of my general weekly yoga classes, passing my much loved students at Sherston Village Hall and Lower Shaw Farm into the capable hands of Eloise and Lisa respectively. So it feels right to take a breath now, in gratitude for all the students, teachers and scholars I’ve had the pleasure of working with this year.

I’m thankful for my remaining weekly class at Rowde Village Hall, and for the specialised work I do each week teaching yoga at Canon’s House respite centre, Ridgeway School and Fairfield Farm College. These are the students that keep me inspired, and grounded, and passionate about the work of real yoga teachers, everyday. I’m also grateful for the various funding sources that keep the work going, including YogaQuota, for bringing yoga to the teens at Fairfield. Just last Monday they demanded resources to start a home practice, after just three months of classes. But I also have had a lot of fun taking an established client into the hydro pool with Harry’s Hydro, which is a whole new world of fun for me and my co-conspirators Di and Jo.

A great part of the work this year has involved talking about my research and leading workshops for studios and sanghas, If you’ve hosted me this year, you’re an early adopter of the work, and I won’t forget that. If you’re looking for engaged and evolving grassroots yoga communities, you can’t do better than Pete Blackaby’s crew in Brighton, YogaQuota in Oxford, and Lucy Greaves’ sangha in Colchester, all helping me refine the ‘Honouring Our Sources’ workshop. There’s a special place in my heart also for the Barefoot Body sangha in Cambridge for engaging with a workshop on Sangha and Service, for Naada Yoga Montreal, for sponsoring a four day workshop we called ‘Consent, contact and context: a trauma informed module’, and Spirit Loft Toronto for hosting a lecture on post-lineage yoga. I also dropped into teacher trainings with the Yoga Nidra Network, Janine and Lucy of the Children and Young People’s Therapy course, and Tara Fraser, to talk about my work and help out in various ways. I’ll come back any time, and I have plans in 2020 for a lot more.

Phil and I did our own seva with our sangha at the Beltane Bhakti Gathering, Sundara, Santosa and the new Kirtan Fest in Swansea. I got to watch Simran Uppal, Susanna Barkataki, Jason Birch, Jacqueline Hargreaves and Jivana Heyman at work. And I will never forget the Brighton Yoga Foundation for bringing together myself, Karen Rain, Jubilee Cooke, Josnia Pankhania and Jacqueline Hargreaves in the same room for the first time, to talk about abuse in yoga. It was an honour to share a stage with you, and I hope we can be together again soon. The film of that panel, by the way, will be available soon, thanks to Yoga International. Yoga International were also there when I got to share a stage with my dear friend Uma Dinsmore-Tuli, with Richard Miller, Stephanie Lopez, John Vosler and more at the first ever International Yoga Nidra conference. Kripalu was rather more luxurious than the minibus Uma and I will be sleeping in tomorrow night! I had an even better time at the Network Yoga Therapy conference with more new friends than I can mention, and a piece of my heart went with Stephen Porges and Sue Carter, with Ganesh Mohan, and with the two Annekes – Sips and Lucas. I also got to share teaching with Eunice Laurel and Ruth Westoby at the London Yoga festival – two of the most talented teachers I know.

In academic events, I hung out in the early career pit of despair at the BASR, with too many friends to mention, and a few notable absences this year. May we all find the contracts we deserve, and may the UCU strike bring us all a better future. I also had the honour of lecturing at the SOAS Centre of Yoga Studies, and the University of Gloucester. More of this please! I applied for a few jobs and a lot of post-doc research grants with the help of friends and colleagues such as Mark Singleton, Suzanne Newcombe, Graham Harvey and the newly Emeritus Professor Gwilym Beckerlegge, who are always ready for a reference, and the friendly plotting of Giorgio Scalici, Aled Thomas and Vivian Asimos in particular. I reviewed a chapter for the Routledge Handbook of Yoga, submitted a chapter for the Handbook of Performance Philosophy, a rather cheeky article for for the Journal of the BASR, and to helped edit Uma’s new book, and reviewed a couple of other books by Donna Farhi, Leila Stuart and Jivana Heyman.

I wrote a lot of blog posts, not just here, but also for Network Yoga Therapy, YogaQuota, The Luminescent, the OU, and Accessible Yoga. I recorded podcasts for the Religious Studies Project, Ashtanga Dispatch, and God Mode, gave a couple of interviews for Yoga International, Barefoot Body and Yogamatters.

I sat on the BASR ethics review, consulted for the Yoga Nidra Network again, mentored a few yoga teachers (more of this please too!), read what I could on trains, did just enough practice to keep me healthy, did pretty much no washing up (thanks Phil!), had more lunches and meetings and phone calls with more people than I can mention here, oh, and I graduated. And wrote a book. In all that time, I may just have broken the threshold to pay income tax, for the first time in a decade. That would be nice, but it’ll be close, I think. The intersection of yoga teacher, academic and writer is not a well-paid one, but I have known that for a while. Support your yoga teacher, be honest about your income, especially if you’re one of the lucky ones earning well above the average, and join a union, any union. Norman Blair, I want to talk again very, very soon.

It’s been a busy year. I’m going to take January to regroup, refocus and plot. I’m already thinking about who I want to work for, who I want to hang out with, what new projects to put my energy into. If you want to see me, or work with me, this should give you some idea of how you might do that. Please get in touch. I need you to help keep the research going, the writing relevant, and food on the table. More in the New Year. For now, I wish you a gentle festive season, with enough abundance that it’s easy to be grateful, and not too many hard knocks and choices. All I want for Christmas is a Labour government and an end to Brexit. Come on Santa, you know we’ve been good. Please…?

← Yoga means unions?
What would it take to walk out? →