by Theo Wildcroft on 3rd November 2019 in Blog 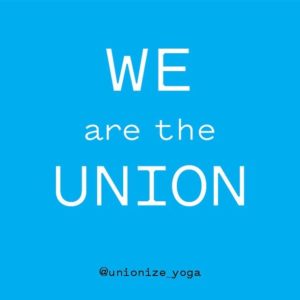 Most of you reading this will be yoga teachers, somewhere in the world, so you will already be aware of how precarious, isolating, and badly paid yoga teaching can be. What we are all conditioned to think of as the contemporary yoga mainstream describes a highly commodified service product. Yet while yogawear mega-brand Lululemon currently reports sales of over $900 million a quarter, yoga teaching for the majority, most of whom are women, is increasingly precarious, competitive and poorly paid.

There’s a lot to be examined here about the exploitation of practices along fractures created by colonialism and neoliberalism. But dissatisfaction with modernised lineage models is mounting, as is criticism of standardised, commercial brands. Heated debates about the ‘authenticity’ of specific practice forms, the extraction of wisdom techniques for commercial gain, and the ‘true’ meaning of the practice, often dominate the Facebook threads and Instagram posts, the blogs, and podcasts of yoga-related social media.

In among these debates, many of you are asking yourselves, is the way we teach in commercial situations truly compatible with what we mean when we say ‘yoga’?

I can’t answer that question, but I do know that who profits from the practice can be closely linked with who gets to define it – not for academics or serious practitioners, but in the minds of the general public. And that public is being conditioned to believe that the practice is a commodity, one worth rather less than the mat you practice on, or the clothes you wear to practice in.

Established yoga teachers in many countries know how much more rewarding yoga teaching is when it is taken seriously as an educational intervention, an adjunct therapy, and as an aid to community building and activist work. I have always found it interesting that when I work in institutions, the amount of support I get, and the relationships I am able to build, often go hand in hand with how quickly my invoices are paid. In schools and centres, again and again, whether budget can be found to pay me seems to have little to do with how cash-strapped they are. After all, compared to other costs, my rate is negligible.

Obviously, seva classes and donation classes and charitable offerings are also a valuable part of the landscape of teaching yoga. But in other cases, income inequalities are more glaring. Outside of specialist therapeutic work, while many, many independent yoga studios struggle to make ends meet, the big yoga teaching chains can make millions. Those big chains, together with equipment and clothing brands associated with yoga, such as Lululemon and Sweaty Betty, are part of a global, 16 billion dollar a year industry.

This industry is entirely parasitical on the labour, compassion, financial support and goodwill of both teachers and students.

And once again, where teachers aren’t valued financially, poor conditions often follow. There’s an odd sleight of hand being played in many studios, where teachers do not set their rates, or their hours, and even what they teach is controlled by studio managers, and yet they are ‘independent contractors’ rather than employees. In the UK at least, that’s a dangerous and arguably illegal line for studios to be taking.

So while no-one wants to talk about labour disputes in class, and I’ve never yet met a yoga teacher who was in it for the money: income inequality, precarious employment, and the right to teach in a way that feels authentic to your own practice are of rising importance.

We can’t solve these issues as individuals, and so there are currently vital steps underway towards unionising yoga teaching both in the UK and in the US.

Collective action through unionisation is a tried and true tactic of achieving working class justice, and has always provoked extreme propaganda and even violence around the world. Here in the UK, breaking up union power was arguably the biggest achievement of conservative government in the 80s and 90s. Wherever you see unionisation underway, what’s really happening is class conflict: labour versus capital, those who ‘do’ versus those who ‘own’, or, to put it another way, those who practice versus those who profit. We’ve had at least a generation of propaganda efforts by right wing administrations to demonise collective action in any form, so if your instinct is to respond with individualised solutions such as ‘we can choose the life we want to live’ or ‘thinking about money isn’t yogic’, or ‘if you set your intention right, there is abundance for all’, please know that these are consistent with what is known as prosperity doctrine, which arose as a justification of the rise of (extremely wealthy) evangelical Christianity in the US.

In the US, the yoga unionisation movement is focused on a specific population: teachers for the huge YogaWorks chain. The hope is that conditions there are so bad, and there are simply such large numbers of yoga teachers involved, that a union can be formed. As is usual for the US, the company is responding with a propaganda campaign. If you’re an American yoga teacher, I would love you to give the new union some love and support, even if you don’t work for a major chain.

Here in the UK, our yoga teaching landscape is a little different, a little more diverse, but although in many ways UK teachers are in a better position, US style mega brands are rapidly gaining ground and are already causing similar issues. When Norman Blair tried to talk with some studios about this issue, many were defensive, or even hostile. Meanwhile, for those of you in specialist work, a health trust in London recently advertised for a ‘yoga instructor’ who was trained and experienced working with cancer survivors. They were offering £27 per session. If you are self-employed, a good rule of thumb is that you should be getting an hourly rate 2 or 3 times your income level, to cover costs, training, sick pay, holiday, admin, and more. I know you can work out the maths on that one.

The UK group behind yoga unionisation efforts is, therefore, starting with a little discernment and knowledge acquisition. They have a questionnaire they’d like UK yoga teachers to fill in, so they can get an idea of where the issues lie, and what the average situation and pay is for most, so they can represent yoga teachers better.

For both groups, this is a volunteer effort, offered in service to the wider yoga teaching community by some of its most dedicated members. There’s (as yet) no slick websites, no paid positions, just people trying to figure it out in their spare time, in community. But honestly, both these efforts at unionising yoga teachers could be among the most significant and positive things to happen in yoga in the US and UK in years. As you can probably tell, I’m not writing as a dispassionate researcher here. I will be watching these developments with close attention.