by Theo Wildcroft on 26th June 2020 in Blog, Uncategorised 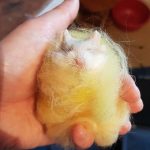 There are so many big stories being told right now, and I am mostly listening, sharing, amplifying those more urgent than my own. But I wanted to share a small story with you, if you have the time and the energy, because there are days when I feel as if history is moving so fast, and the forces involved are so powerful, and those with power over us so intractable, that the small stories, the everyday stories, are the only ones I can really hold onto and make a meaningful contribution to.

So we buried a tiny dwarf hamster the other week. She died, probably of kidney issues, which were probably untreatable in one so tiny and insignificant. She died in her sleep, in my cupped hands, and there were tears, and we wrapped her in a few tufts of golden wool and buried her in the garden without much ceremony, but with love. Love because we had let her into our lives, and she into hers, and there was that strange magic between us that can grow between beings of very different species. And then we woke her sister up a few times, just to check, you know*, and we put away her things, and beyond memories and a few sad moments to come, will be the sum effect on the world of a tiny hamster called Pixie Dream Girl. And that is right.

I’m touched by the hundred or so people on social media who had a moment of shared sadness for her death, but there are more important things going on.

Because that same day, the UK government announced that ‘only’ a score or two of people in Britain died of COVID-19, as if that was a triumph. Because America continues to burn in justified response to the systemic, endless, state-sanctioned murder of black humanity. Meanwhile, the international LGBT+ community mourned the anniversary of the Pulse massacre in the middle of a Pride month we cannot properly mark. In London that weekend, racists rioted in defence of statues, and yet another Grenfell anniversary passed. We still have no clear and honest account of how many died that night.

There is no justification for any of these deaths, nor for the thousands of disabled and poor people here in the UK whose lives were shortened by a more than a decade of free market ideology at any human cost. Each one of them was loved, each one of them had people who will grieve their loss for years and decades to come.

This is an ideology that rates death as cheap, and justice as expensive, and does nothing without counting the cost of both. It is, of course, beyond wrong. It is morally bankrupt. It is also a fundamental breakdown of the social contract – because unless we can trust that the state at least cares for our continued existence, if not our happiness and wellbeing, then we are no longer truly citizens. All we have left to count on is those people we trust, those who would grieve if we died.

Once you truly realise that, even from a position of relative privilege, then I think you might finally understand why someone might want to burn down the world. Sometimes the world has to be brought to its knees in order to listen.

So if I’m a little quiet these days, it’s partly because I’m listening, and partly because I’m in mourning, not just for those that continue to die, needlessly, but for a world where those in power at least pretended that black, brown and indigenous lives were precious, that queer and trans lives were precious, that poor and disabled lives were precious. And perhaps they never have, and perhaps this is just the realisation we needed to push for real, radical change. But I’m tired, and I’m a little broken, and I need some time off. If you’re also finding this harder than you thought you might, this little article might help.

Justice has always been a relay race. Rest when you need it. Support others when you can. And above all, remember the lives beneath the statistics.

* Her sister Manic is thriving, in case anyone’s worried!