“A significant contribution to original knowledge” 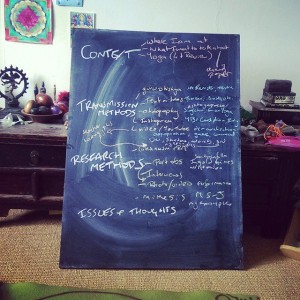 In 2014, I began the immense project that is a PhD. A PhD isn’t a taught process, it’s more of a guided obsession. The official term for what I have to achieve is: “a significant contribution to original knowledge”.

My research area is the relationship between physical practice, animate bodies and systems of religious authority. Or as my main supervisor – Graham Harvey from the Religious Studies department of the Open University – puts it: “People doing yoga in fields”. I’m currently immersing myself in subjects as diverse as the neurobiology of consciousness, post-colonial methods of knowledge transmission, and the history of the guru system.

Academia is generally silent on the reality of modern yogic practice, particularly outside of orthodox systems and schools. And from the other side, as yoga practitioners we seldom ask ourselves: how does this person know what they are telling me to be true? My hope is that my work will in part be a conversation between academia and the yoga community.

The evolution of yoga

We’re taught that yoga means union, and I love that definition. But historically, yoga has meant something much closer to ‘discipline’ or ‘practice’. Yoga is a yoking to something – be it physical practice, meditation, serving the poor, or devotion to the gods. Yoga denoted an attitude, a strength of dedication – not the subject of that dedication. So under the label of yoga, we find many diverse things.

As Mark Singleton says: “the primacy of asana performance in transnational yoga today is a new phenomenon that has no parallel in pre-modern times”. But this trend – of taking a practice, combining it with others, innovating and relabelling it – is the main evolutionary mechanism of yoga’s past, present, and future. And it’s often older than we think. If you think repackaging yoga for the masses began when yoga was taught in gyms, you probably haven’t heard about Swami Sivananda offering initiations by post.

And what I’m finding now, thanks to a little gentle prodding from my second supervisor, Gwilym Beckerlegge, is that there’s an unsung tradition in yoga. It is the lineage of ideas and inspirations, of sharing in community and fellowship, rather than careful reproduction from guru to student, and it goes back a very long way. It reaches back at least to the man labelled ‘the first American yogi’ – Henry David Thoreau.

A river of thought and practice

From its complex relationship with purity and pollution; to its links to political power and the mythology of nationalism; to the half-truths and showmanship of its creation and dissemination; to intra- and inter- personal violence; to half-truths, rumours and myths about the body – all these things are in the heart and centre of what has been handed down to us, and which we call yoga.

Yoga isn’t the ancient, exclusive property of swamis, ashrams and gurus. It is an evolving, diverse and transnational river of thought and practice that belongs to every practitioner. If we are fearless, as a collective, we can be part of a movement for the next, radical evolution of yoga in service to the world. This doctoral project, as it evolves, is in service to that ideal. 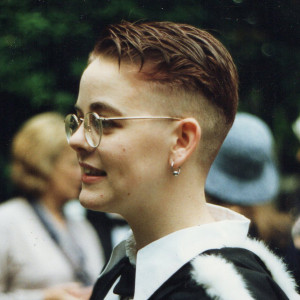 As my research continues, you’ll find updates here, and links to presentations and papers as they are given and published. I have a profile on academia.edu and I share articles and research that interest me via Twitter.

If you’re a yoga teacher or practitioner that has moved away from your lineage, combines traditions, or has never committed to one way, one teacher – if you, too, are a post-traditional yoga nomad, and you’d like to be part of the conversation, please do get in touch.

On this journey I am not alone – far from it. I am immensely grateful for conversations with fellow travellers in the leading edge of transnational yoga, such as Uma and Nirlipta Dinsmore-Tuli, Matthew Remski, Tiffany Rose, Scott Johnson, Carol Horton, and Amy Champ.

I am also greatly encouraged by the support of fellow travellers on the doctoral journey – colleagues such as Naomi Jacobs, Alison Robertson, Claire Wanless, and Kavita Maya; and many other academics who have offered advice here and there. I honestly do have two of the best supervisors possible.

Reviewing the Field8th January 2015In “Blog”

A baby doctorate takes its first steps20th November 2014In “Blog”